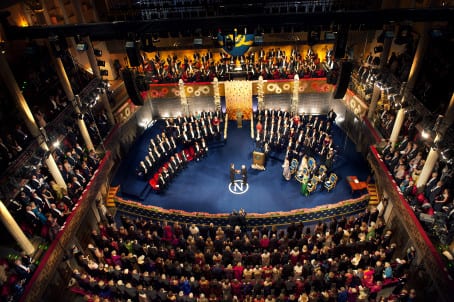 Update: the Nobel Prize in Physics 2013 has been awarded to François Englert and Peter W. Higgs for the theoretical discovery of a mechanism that contributes to our understanding of the origin of mass of subatomic particles, and which recently was confirmed through the discovery of the predicted fundamental particle, by the ATLAS and CMS experiments at CERN’s Large Hadron Collider. Click here for the full press release.

Who will win this year’s Nobel Prize in Physics? Find out from 12.45 CET right here (the video will become available as soon as the Nobel Prize team starts to broadcast).

Apologies for the video difficulties; the live stream can be watched directly from the Nobel Prize site here: http://www.nobelprize.org/