New ways to diagnose skin cancer – making biopsies a thing of the past?

A biopsy is a painful and scarring but often unavoidable procedure. Now, scientists have reported promising results of autofluorescence and reflectance measurements of tissue as a noninvasive approach for basal cell carcinoma diagnosis. 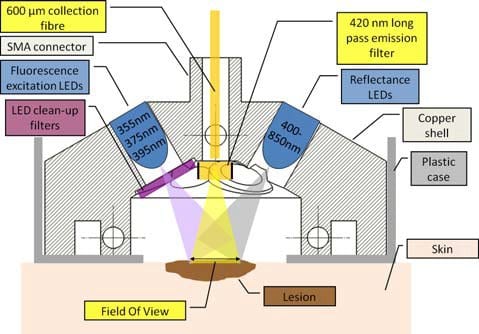 Non-melanoma skin cancer, which includes basal cell carcinoma and squamous cell carcinoma, accounts for 90% of all skin malignancies and represents a significant health problem worldwide. In the UK and the USA respectively, there are approximately 100,000 and 1,000,000 new cases reported every year.

Although a number of novel imaging techniques have become available, there is still no gold standard for skin cancer imaging. Most incidences of skin cancer are diagnosed based on clinical history and visual inspection by a clinician. In many cases the diagnosis still remains unclear and a biopsy is required for confirmation. A non-invasive method of assessment would be desirable. 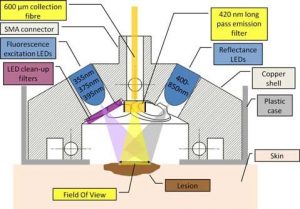 Scientists from Sweden and the UK have studied the application of both a time-resolved fluorescence spectrofluorometer and a compact instrument combining steady-state spectroscopy of diffuse reflected light and fluorescence to investigate the clinical diagnostic potential of autofluorescence and reflectance measurements of tissue. A total of 25 patients at Lund University Hospital were measured prior to surgical excision of the investigated region. The experiments revealed clear differences between healthy and diseased tissue both in terms of spectral properties and autofluorescence lifetime (for excitation at 445 nm), indicating the potential of these instruments for clinical diagnostic purposes.

The team lead by Alex J. Thompson and Chris Dunsby from the Imperial College in London (UK) used singular value decomposition to reduce the dimensionality of steady state diffuse reflectance and fluorescence spectra. Linear discriminant analysis was then applied to the measurements of basal cell carcinomas (BCCs) and used to predict the tissue disease state with a leave-one-out methodology. Leave-one-out cross-validation works by using a single observation from the original sample as the validation data, and the remaining observations as the training data. Each observation in the sample is used once as the validation data.

With the help of this approach, the researchers were able to correctly diagnose 87% of the BCCs. When using 445 nm excitation they observed a decrease in the spectrally averaged fluorescence lifetime between normal tissue and BCC lesions with a mean value of 886 ps. The scientists found the fluorescence lifetime for BCCs to be significantly lower than that of the surrounding healthy tissue in all cases, and their future plans involve increasing the number of lesions investigated such that it is possible to draw statistically significant conclusions for several more individual sub-classes of skin cancer such as squamous cell carcinomas and malignant melanomas.