Biocompatible, biodegradable and porous LC elastomers were used as viable, soft scaffolds for cell growth and proliferation in a spatial (3D) fashion. 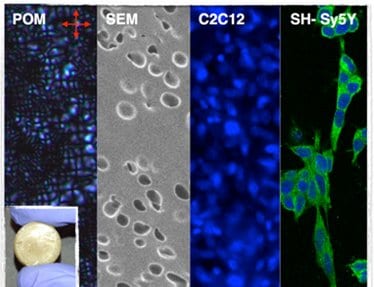 Tissue culture has provided a platform for studying the behavior of cells in artificial environments since the beginning of the 1900’s. It allows researchers to precisely measure cell responses to different environments. This includes studies on the differentiation of stem cells as well as the engineering of implantable scaffolds to replace diseased or damaged human tissues including bones, joints, or ligaments.

Primarily synthetic polymers like poly(ethylene glycol), biomaterials such as collagen or agarose, even ceramic cell scaffolds established themselves as promising candidates for engineering tissues and cellular delivery. A major drawback has been the non-responsiveness of these materials both as a feedback to external stresses such as deformation to induce a cell response (for example: stem cell differentiation) and also as a ‘reporter’ that offers measurable evidence of a cell response.

To tackle this problem, a multidisciplinary team of researchers from both Kent State and Case Western Reserve University led by Elda Hegmann has now developed a series of biodegradable and biocompatible liquid crystalline elastomers as smart responsive cell scaffolds. Liquid crystal elastomers or rubbers have been advertised early on as artificial muscles by Nobel Laureate Pierre-Gilles de Gennes, and they have also found use in sensors, actuators, and tunable lasers. The latter was an invention at the Liquid Crystal Institute (LCI) at Kent State University, where the main part of the current work on cell scaffolds was done as well.

The newly developed liquid crystal rubbers permit cell attachment and cell viability (expansion and proliferation of cells) while increasing their biomechanical functionality (i.e. the cells are embedded in an environment that responds to stress like real tissue). This is an entirely new ‘trick’ from liquid crystals which are well known from the liquid crystal displays that surround us everywhere. Hegmann’s team that founded the Regenerative Medicine Initiative at Kent State (ReMedIKS) reports that the properties of these smart, responsive liquid crystal elastomer scaffolds can be tuned by varying factors such as hydrophilic-hydrophobic balance, tensile strength, porosity (a key factor for 3D spatial cell cultures), biodegradation rate, bio-adhesion, and bulk liquid crystal behavior. Current and future studies will establish how to best garner the response to external stimuli with respect to inducing specific clues to cells including shearing, mechanical deformation, or applying external fields.