New process can convert waste sulfur into plastic for batteries

Process can transform waste sulfur into a lightweight plastic that may improve batteries for electric cars, reports a University of Arizona-led team. 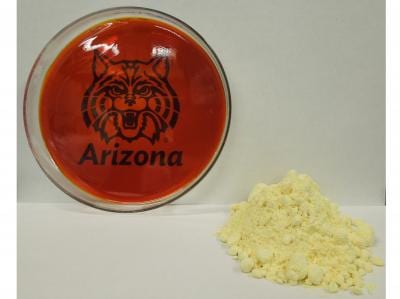 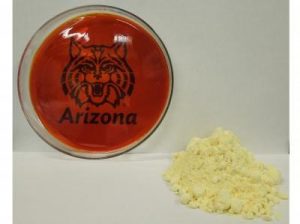 A University of Arizona-led research team has discovered a simple process for making a new lightweight plastic from the inexpensive and abundant element sulfur. The petri dish on the left contains the plastic. The yellow powder on the right is sulfur. The team has already made a lithium-sulfur battery — the type of next- generation battery that is lighter and cheaper than those currently used in electric and hybrid cars. Jared Griebel/ Pyun lab, University of Arizona department of chemistry and biochemistry.

A new chemical process can transform waste sulfur into a lightweight plastic that may improve batteries for electric cars, reports a University of Arizona-led team. The new plastic has other potential uses, including optical uses.

The team has successfully used the new plastic to make lithium-sulfur batteries.

Next-generation lithium-sulfur, or Li-S, batteries will be better for electric and hybrid cars and for military uses because they are more efficient, lighter and cheaper than those currently used, said Pyun, a UA associate professor of chemistry and biochemistry.

The new plastic has great promise as something that can be produced easily and inexpensively on an industrial scale, he said.

The team’s discovery could provide a new use for the sulfur left over when oil and natural gas are refined into cleaner-burning fuels.

Although there are some industrial uses for sulfur, the amount generated from refining fossil fuels far outstrips the current need for the element. Some oil refineries, such as those in Ft. McMurray in Alberta, are accumulating yellow mountains of waste sulfur.

“There’s so much of it we don’t know what to do with it,” said Pyun. He calls the left-over sulfur “the garbage of transportation.”

About one-half pound of sulfur is left over for every 19 gallons of gasoline produced from fossil fuels, calculated co-author Jared Griebel, a UA chemistry and biochemistry doctoral candidate.

The researchers have filed an international patent for their new chemical process and for the new polymeric electrode materials for Li-S batteries.

Pyun wanted to apply his expertise as a chemist to energy-related research. He knew about the world’s glut of elemental sulfur at fossil fuel refineries — so he focused on how chemistry could use the cheap sulfur to satisfy the need for good Li-S batteries.

He and his colleagues tried something new: transforming liquid sulfur into a useful plastic that eventually could be produced easily on an industrial scale.

Pyun and his colleagues identified the chemicals most likely to polymerize sulfur and girded themselves for the long process of testing those chemicals one by one by one. More than 20 chemicals were on the list.

“The first one worked – and nothing else thereafter,” Pyun said.

Even though the first experiment worked, the scientists needed to try the other chemicals on their list to see if others worked better and to understand more about working with liquid sulfur.

The new plastic performs better in batteries than elemental sulfur, Pyun said, because batteries with cathodes made of elemental sulfur can be used and recharged only a limited number of times before they fail.

The new plastic has electrochemical properties superior to those of the elemental sulfur now used in Li-S batteries, the researchers report. The team’s batteries exhibited high specific capacity (823 mAh/g at 100 cycles) and enhanced capacity retention.

Several companies have expressed interest in the new plastic and the new battery, Pyun said.

The team’s next step is comparing properties of the new plastic to existing plastics and exploring other practical applications such as photonics for the new plastic.