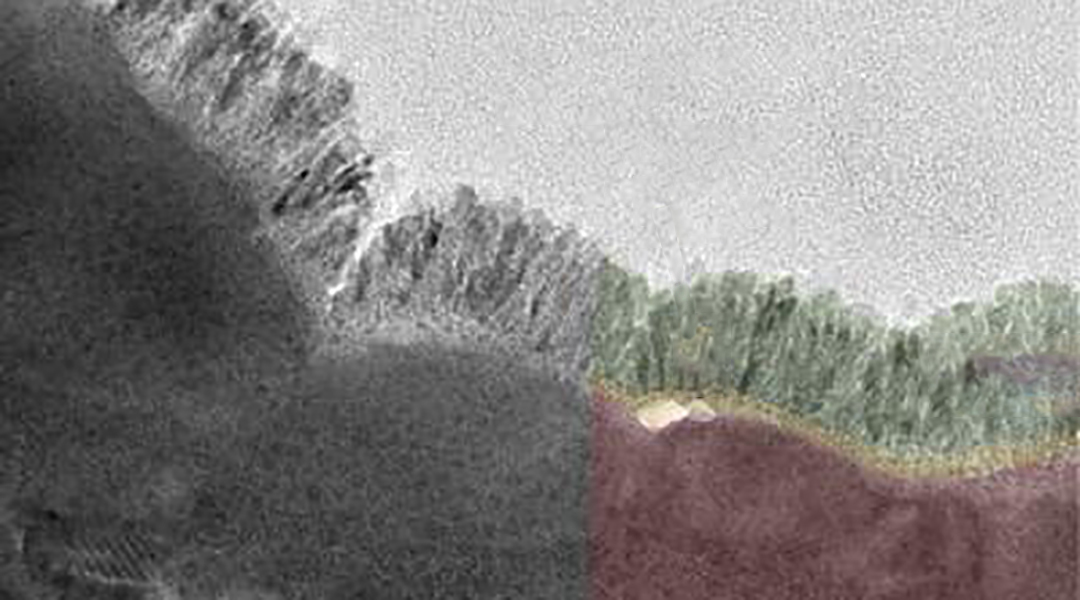 Hydrogen is an important factor in a sustainable energy system. The gas stores energy in chemical form and can be used in many ways: as a fuel, a feedstock for other fuels and chemicals or even to generate electricity in fuel cells.

One solution to produce hydrogen in a climate-neutral way is the electrochemical splitting of water with the help of sunlight. This requires photoelectrodes that provide a photovoltage and photocurrent when exposed to light and at the same time do not corrode in water. Metal oxide compounds have promising prerequisites for this. For example, solar water splitting devices using bismuth vanadate (BiVO4) photoelectrodes achieve already today ~8 % solar-to-hydrogen efficiency, which is close to the material’s theoretical maximum of 9%.

To achieve efficiencies beyond 9%, new materials with a smaller band gap are needed. The metal oxide α-SnWO4 has a band gap of 1.9 eV, which is perfectly suited for photoelectrochemical water splitting. Theoretically, a photoanode made of this material could convert ~20% of the irradiated sunlight into chemical energy (stored in the form of hydrogen). Unfortunately, the compound degrades very quickly in an aqueous environment.

Thin layers of nickel oxide (NiOx) can protect the α-SnWO4 photoanode from corrosion, but were found to also significantly reduce the photovoltage. To understand why this is the case, a team led by Dr. Fatwa Abdi at the HZB Institute for Solar Fuels has analysed the α-SnWO4/NiOx interface in detail at BESSY II.

“We studied samples with different thicknesses of NiOx with hard X-ray photoelectron spectroscopy (HAXPES) at BESSY II and interpreted the measured data with results from calculations and simulations,” says Patrick Schnell, the first author of the study and a Ph.D. student in the HI-SCORE International Research School at HZB. “These results indicate that a thin oxide layer forms at the interface, which reduces the photovoltage,” explains Abdi.

Overall, the study provides new, fundamental insights into the complex nature of interfaces in metal oxide-based photoelectrodes. “These insights are very helpful for the development of low-cost, scalable metal oxide photoelectrodes,” says Abdi. α-SnWO4 is particularly promising in this regard. “We are currently working on an alternative deposition process for NiOx on α-SnWO4 that does not lead to the formation of an interfacial oxide layer, which is likely to be SnO2. If this is successful, we expect that the photoelectrochemical performance of α-SnWO4 will increase significantly.”