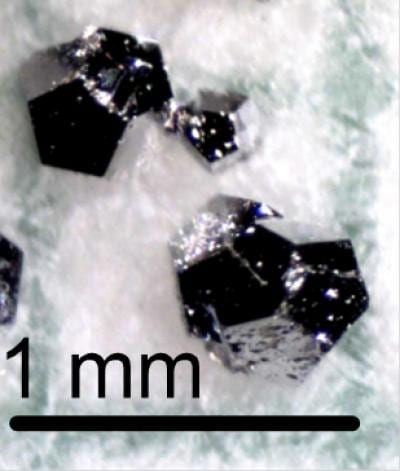 The pentagonal dodecahedral morphology of the icosahedral phase is shown with a millimeter scale; grains as large as 1.0 mm have been grown. Image: Ames Laboratory, USDOE.

Scientists at the U.S. Department of Energy’s (DOE) Ames Laboratory have discovered a new family of rare-earth quasicrystals using an algorithm they developed to help pinpoint them. Quasicrystalline materials may be found close to crystalline phases that contain similar atomic motifs, called crystalline approximants. And just like fishing experts know that casting a line in the right habitat hooks the big catch, the scientists used their knowledge to hone in on just the right spot for new quasicrystal materials discovery.

“This discovery of binary magnetic quasicrystals provides us with a means of doing a cleaner comparison of structural and magnetic properties between a quasicrystal and its periodic approximant,” said Alan Goldman, Ames Laboratory faculty scientist and a distinguished professor at Iowa State University. “It’s a tremendously exciting thing.”

Goldman is part of the Ames Laboratory’s research group which studies the microscopic properties of crystals through neutron and x-ray scattering performed at Argonne National Laboratory’s Advanced Photon Source. His collaborator, Ames Laboratory faculty scientist and Iowa State University distinguished professor Paul Canfield, was one of the first scientists able to grow single-grain, rare-earth quasicrystals, and his work continues in discovering, growing, and characterizing them.

High-energy X-ray diffraction patterns from a single grain of i-Gd-Cd were taken at the Advanced Photon Source at Argonne National Laboratory with the beam parallel to the five-fold axis. Ames Laboratory, USDOE.

Since the 1982 discovery of quasicrystals– intermetallic compounds that are ordered but not periodic–by Nobel Prize winning chemist Dan Shechtman, many have been synthesized by researchers worldwide, and one has even been discovered occurring naturally.

But scientists at the Ames Laboratory, with their expertise in rare earths and magnetism, were beginning to look for the next step after that revolutionary first discovery.

“For the last ten years, we have been moving beyond just the innate beauty of these quasicrystalline structures to find out what else is interesting about them. Are the electrical properties any different? Are the magnetic qualities unusual?” Goldman asked.

Goldman and Canfield, like many researchers around the world began to wonder what magnetic properties would do, extended to the unique design of quasicrystals.

“If you could place magnetism on these quasicrystal structures, what would it look like?” Canfield said the researchers wondered. “You can have antiferromagnets or ferromagnets in the crystalline or periodic example. You have a disordered magnet or spin glass with the amorphous system. This is known. But with quasicrystals, you have an aperiodic arrangement. Will it affect the magnetism in some weird or novel way? It’s a strange environment for magnetism.”

“There’s been a lot of theoretical and experimental work on magnetic quasicrystals and mathematically there’s no reason why magnetic ordering can’t happen,” said Goldman. “But experimentally it was never observed. Why? What does this teach us about magnetism in complex environments?”

A few years ago, a series of periodic approximants of rare-earth cadmium were discovered that did order magnetically by research colleagues in Japan. The Ames Laboratory scientists worked to characterize by scattering the magnetic structures in collaboration with other researchers from France, Japan, and the United States.

Goldman and Canfield suspected that there could be quasicrystals very close to these rare earth cadmium approximants, hidden in very limited regions of temperature and composition space in the phase diagram, and most easily attainable through the flux growth method Canfield has used to grow other quasicrystals. Together with Ames Lab scientists Sergey Bud’ko, Andreas Kreyssig, Kevin Dennis, Mehmet Ramazanoglu, Anton Jesche, and physics graduate student Tai Kong, Goldman and Canfield initiated a new search for magnetic quasicrystals.

Goldman asked Canfield to start by growing the approximant, but Canfield was shooting for both.

“My intent was not just to go to the approximant, but to cool this as far as I could before everything solidified; I was fishing for the binary quasicrystal,” Canfield said. “It was an attempt to survey the system. I know there’s an approximant in there, but is there another surprise?”

And sure enough, there was. Canfield had grown the approximant, but he also found the presence of faceted pentagonal dodecahedra, one of the signatures of quasicrystals. Goldman’s x-ray scattering work confirmed the material as a quasicrystal.

In the rare earth cadmium approximants, there is magnetic order. In the quasicrystalline materials, however, the scientists found spin glass behavior, similar to the magnetic behavior in amorphous materials.

“What we have here is proof of principle. Yes, you can find quasicrystals near approximants; you just have to search the right way,” said Canfield. “There’s still work to be done; it’s my hope that there is lurking out there a quasicrystalline antiferromagnet, which means an ordered magnetic structure.

It hasn’t been theoretically ruled out,” said Goldman. “What I do know is that quasicrystals continue to surprise me.”