New Faces on the Advanced Healthcare Materials Board 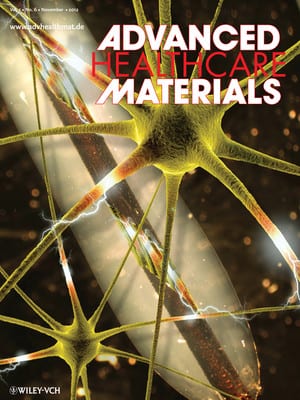 Chunhai Fan is an expert in the area of biosensors, biophotonics and DNA nanotechnology. He obtained his B.S. and Ph.D. from the Department of Biochemistry at Nanjing University in 1996 and 2000. After his postdoctoral research at University of California, Santa Barbara, he joined the faculty at Shanghai Institute of Applied Physics, Chinese Academy of Sciences in 2004. He is now Professor and Chief of the Division of Physical Biology and the Bioimaging Center at the Shanghai Institute of Applied Physics. Prof. Fan has published over 200 papers in peer-reviewed journals, and is the inventor on more than 30 patents and be recognized with several important awards including the Shanghai Rising Star for Young Scientists, a National Science Foundation of China Award for Outstanding Young Scientists and a Chinese Academy of Sciences Award for Distinguished Youth.

Dr. Khademhosseini is an Associate Professor at Harvard-MIT’s Division of Health Sciences and Technology, Brigham and Women¹s Hospital and Harvard Medical School as well as an Associate Faculty at the Wyss Institute for Biologically Inspired engineering.  His interdisciplinary research has been recognized by over 30 major national and international awards, including the highest honour given by the US government for early career investigators, the Presidential Early Career Award for Scientists and Engineers, the Pioneers of Miniaturization Prize from the Royal Society of Chemistry and a TR35 award from the Technology Review Magazine for the world’s top young innovators.  His research is based on developing micro- and nanoengineered biomaterials to control cellular behaviour. Having published approximately 300 articles in peer-reviewed journals and has been cited more than 10000 times.

Dr.  André Nel is a Professor of Medicine and Chief/founder of the Division of NanoMedicine at UCLA.  He is the Director of the UC Center for the Environmental Impact of Nanotechnology and the UCLA Center for Nano Biology and Predictive Toxicology which are housed in the California NanoSystems Institute at UCLA. Dr Nel served a Chair of an NIH Study Section, is a Distinguished Foreign Professor in the Chinese Academy of Science, a peer-selected member of Best Doctors of America, recipient of the John Salvaggio Memorial Award recognizing his outstanding service to the specialty and science of Allergy and Immunology, and has represented the NIH and State Department in establishing cooperative research agreements with Japan, the Chinese Academy of Sciences and Russia. His chief research interests are nanomedicine, nanotechnology environmental health and safety, and nanobiology.

Prof. Catherine Picart graduated from the University Joseph Fourier in Grenoble. After carrying out post-doctoral research at the University of Pennsylvania, she was an Assistant Professor at the University Louis Pasteur and an Associate Professor at the University of Montpellier before moving back to Grenoble, where she is now a Full Professor at the Grenoble Institute of Technology.  She was awarded the French Society for Biomechanics Young Researcher award from the French Society for Biomechanics and the Prix Jean-Marc Lhoste from the French Biophysical Society. Her research focuses on employing layer-by layer films as a tool to control cellular processes from adhesion to differentiation, and their applications to musculo-skeletal tissue engineering, drug delivery, and cancer therapy. Moreover, she is interested in the self-assembly and physical chemistry of biological molecules and in protein-lipid membrane interactions. Prof. Picart has been recognized by the European Research Council and was awarded a Consolidator Grant in 2010 and an European Research Council proof of concept grant in 2012. She has published over 90 articles in peer-reviewed journals.

As one of the most respected pioneers in the field of biomedical engineering, Prof. Peppas requires little introduction. His research at the University of Texas at Austin follows a multidisciplinary approach that blends modern molecular and cellular biology with engineering to generate the next-generation of medical systems and devices for patient treatment. He set the fundamentals and rational design of drug delivery systems over the past forty years and developed models of drug and protein diffusion in controlled release devices and biological tissues. Prof. Peppas has been recognized with many prestigious awards including Founders Awards from the AIChE, Society of Biomaterials, Controlled Release Society, the BMES Distinguished Scientist Award, and the AAPS Pharmaceutical Technology Award. He is a fellow of ACS, APS, MRS, AAAS, AIChE, BMES, AIMBE, SFB, CRS, AAPS and ASEE. He has published over 1,250 papers, been cited more than 50,000 times, registered 45 patents.

José Oliveira, Editor-in-Chief, commented “I am pleased to welcome these leading figures in the field of biomedical materials research to the Editorial Advisory Board, I look forward to working with them to ensure that Advanced Healthcare Materials continues to go from strength to strength”

Younan Xia, Chairman of the Editorial Advisory Board added “I am sure the new addition will further enhance the capability of the advisory board, in particular, in areas such as drug delivery and nanomedicine.”