BARD is testing two prototypes of its new 6.5 megawatt class. The official beginning of the certification tests is scheduled for the end of February 2012. 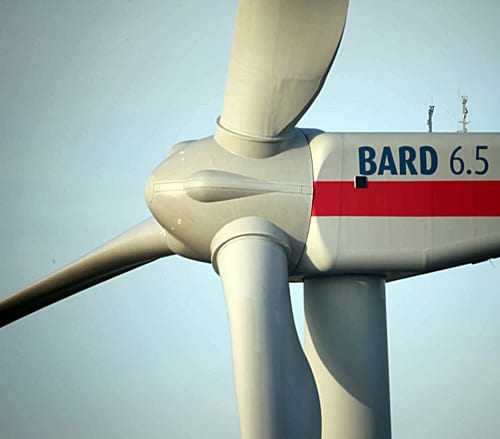 The BARD Group is a project development and investment company specializing in offshore wind farms. Last year, the company started the test program for its new generation of offshore wind turbines. Two “BARD 6.5” turbines were installed at the Rysumer Nacken near Emden, a city and seaport in the northwest of Germany. Both prototypes have a capacity of 6.5 megawatt each. 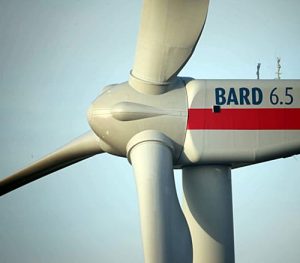 The existing “BARD 5.0” nacelles are replaced by the new turbines. According to the company the new 6.5 megawatt class is one of the most powerful turbines in the offshore wind market. Regarding the size both are identical, meaning with same measurements nearly 30 percent more output can be achieved. BARD offshore wind energy converters have a hub height of 90 meters and a rotor star diameter of 120 meters. The nacelles are 8 meters high, 8 meters broad and 15 meters long. The weight is nearly 280 tons for both types.

In April 2011, the prototypes started a 24 month certification period which includes several testing programs. The official beginning of the “BARD 6.5” certification tests is in the end of February 2012. Simultaneously preparations for the serial production of the “BARD 6.5” have begun leading to an estimated start of series manufacturing by 2013.

At the moment, the Emden based BARD Group is installing the first commercial offshore wind farm in the German part of the North Sea. For the time being, 15 wind turbines are installed at the scene, 8 of them are already connected to the grid and have been delivering “green” energy to the shore since December 2010. After completion by the end of 2012 the wind farm “BARD Offshore 1”, located 100 kilometers in the northwest of the Borkum Island, is planned to deliver enough energy for at least 400,000 households. Therefore 80 wind energy turbines will be erected.

The 6.5 megawatt offshore wind converter has one main gearbox equipped with two drive shafts, both empowering a synchronized generator with a 3.4 megawatt capacity each. The company reported that this new technology is more efficient and easier to maintain as the components used at the moment. BARD equips its new 6.5 megawatt turbines with fully rated converters, enabling them to fulfill the needs and demands of an intelligent future European super grid.

The change of the nacelles including the rotor star will take about 14 days – depending on weather conditions. A heavy lift crane is on site for installation purpose. The replaced “BARD 5.0” turbines, in operation since winter 2007, will be intensively examined and afterwards refurbished, in order to serve as possible replacements for the wind park “BARD Offshore 1”.

Nitrous oxide – Not a laughing matter
From Sandbags to Stilts: Living with Floods
High performance supercaps made from cotton waste and seawater
Solar Energy Goes Organic