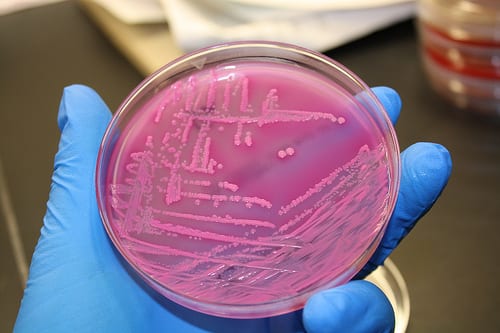 Escherichia coli are rod-shaped bacteria, which are usually found in the lower intestine of humans and assist in the production of vitamin K. However, there are other strains of E coli that cause food poisoning and possible death, as was seen in the 2011 breakout in Germany.

To avoid the possibility of disease due to harmful strains of bacteria, disinfection can be used. Historically, this process used chemicals such as bleach, alcohols, or acids. The disadvantages of the use of such chemicals include their short-term stability and the release of by-products. These chemical disinfectants were replaced by a second wave of colloidal metal oxides or metals, for example titania or silver nanoparticles, which brought improvements in effectiveness and stability. Recently, third-wave disinfectants that are made up of metal surrounded by and organic framework have been developed. In these new formulations, the disinfecting agent is cobalt coordinated within an eight-sided framework. At parts-per-million concentrations the system is able to inactivate 100% of the microbe, shows long-term persistence and leads to fewer harmful by-products. This breakthrough in disinfectant technology should lead to more effective countermeasures to reduce infection and prevent the spread of E coli following an outbreak.

The research was published in the second issue of the new journal Advanced Healthcare Materials.