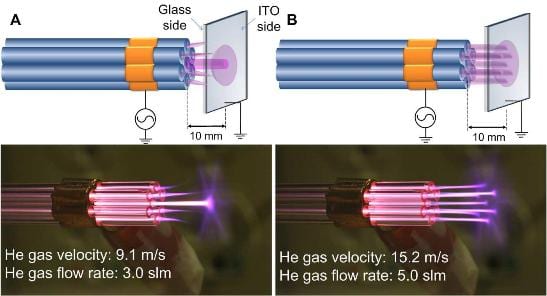 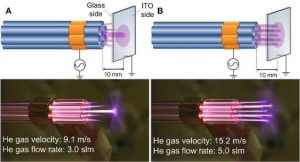 Prof. Kim’s group with Dr. John Ballato and Dr. Sung-O Kim at Clemson University, USA has developed a new plasma jet-to-jet coupling. In order to generate the coupling, a honeycomb-structured array was used in which a central tube is surrounded by a periodic ensemble of similar tubes.

Collections of charged particles from different plasma jets can interact with each other under certain discharge conditions such as when enabled by a close honeycomb-structure. The individual plasma jets now behave in a collective manner and ultimately bundle together to form a very strongly-coupled Coulomb system.

Under identical electrical driving and gas conditions, the plasma emission from the intense coupled plasma jet was approximately four times larger than in a single plasma jet structure. Additionally, the electron energy in the intense plasma mode was larger than that of the well-collimated plasma mode. Consequently, etching of a glass target by the concentrated plasma jet occurs more strongly and quickly despite operating at atmospheric pressure. The intense and energetic plasma jet now becomes useful for applications requiring the high-energetic plasmas, such as etching, nanomaterials growth, thruster and medicine.

Low-cost, portable, and rapidly deployable ventilators
The best model for understanding illnesses in newborns
Researchers ask: Should the pharmaceutical industry be nationalized?
A step toward a universal flu vaccine