A very simple and general method for introducing nitrogen defects into the 2D structure of graphitic carbon nitride.

Photocatalytic water splitting has long been viewed as an important future technology for solar energy conversion and the sustainable delivery of H2 as an energy carrier. 2D graphitic carbon nitride (g-C3N4) has recently emerged as a promising new semiconductor photocatalyst for renewable energy applications including water splitting on account of its excellent photocatalytic activity, non-toxicity and low cost. However, the large band gap (≈2.7 eV) of pristine g-C3N4 hinders its ability to fully utilize the solar spectrum. 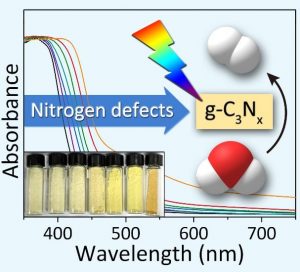 Recently, Tierui Zhang and co-workers at Technical Institute of Physics and Chemistry of the Chinese Academy of Sciences reported a novel alkali-assisted strategy for the synthesis of nitrogen deficient g-C3N4. The strategy involved mixing g-C3N4 precursors (melamine, urea or thiourea) with small amounts of an alkali (KOH, NaOH, or Ba(OH)2), followed by calcination of the resulting mixtures at 550 oC in an alumina crucible. By simply increasing the alkali:organic precursor weight ratio in the starting mixture, more nitrogen defects could be introduced into the 2D g-C3N4 sheets, progressively reducing the bandgap from 2.68 to 2.36 eV.

The study describes a very simple and general method for introducing nitrogen defects into the 2D structure of g-C3N4, allowing precise control over the abundance and types of defect. The findings provide valuable new knowledge about the synthesis of g-C3N4 and also support wider research efforts examining the critical roles of defects in enhancing light absorption and charge transfer processes in 2D semiconductor photocatalysts