The argument for making synthetic fuel from CO2 using renewable electricity in an increasingly electrified world is by now a familiar one. It hinges on the unlikely scenario that lithium ion batteries will never power the massive fleet of large-volume transportation cargo ships and container trucks, carrying goods around the world. This is simply because […]

The argument for making synthetic fuel from CO2 using renewable electricity in an increasingly electrified world is by now a familiar one. 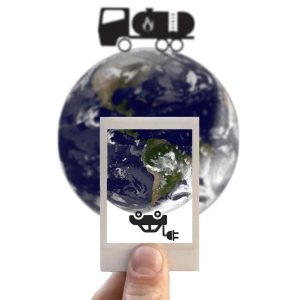 Photo of the earth taken on an instant film. In the background, there is a fossil fuel powered vehicle, while in the foreground there is an electric vehicle. There are two versions of the future, never say never. Graphical concept and artwork, courtesy of Chenxi Qian.

It hinges on the unlikely scenario that lithium ion batteries will never power the massive fleet of large-volume transportation cargo ships and container trucks, carrying goods around the world. This is simply because of their much lower energy density, currently a factor of about 16x by volume and around 48x by weight, compared to hydrocarbon fuel.

With regards to the “energy density gap” between fuel and battery power, this will translate into a reduction in the amount of cargo that can be carried by electrified ships and trucks.

Then there is the question of cradle to grave greenhouse gas emissions for large-scale deployment of battery technology in planes, ships, cars and trucks, raising the questions of is it really better, what about the cost and don’t forget the other sustainable options, such as liquefied natural gas, synthesized from renewable carbon sources as well as liquid organic hydrogen carriers charged with renewable hydrogen. On these questions, life cycle assessments are crucial for estimating materials, energy and economic flows for electric versus fuel transportation systems, enabling one to weigh different options and make rational decisions.

For practitioners and champions of CO2 sourced synthetic fuels, the mantra is to do as much as possible using renewable electricity, however it makes sense to turn CO2 into synthetic fuels for large volume cargo ship and truck based transportation systems. The reality remains that the heavy fuel oil and diesel fuel used to power cargo ships and container trucks respectively, generate huge amounts of greenhouse gas and there is an urgent need for the world’s transportation industries to be electrified.

Kongsberg, a maritime engineering firm, and Yara International ASA, a large Norwegian chemical company, are taking this adventurous and exciting step towards electrification of an autonomous cargo ship. For this pilot project, Kongsberg is developing the battery system, electric drive and all the components for seaborne transportation and autonomous navigation. The plan is to initially use the vessels to substitute for land transport with the ultimate goal being to replace large vessels.

The first vessel is being financed by Yara and will ship products between its Porsgrunn plant to ports in Brevik and Larvik. This electrified cargo ship will replace the current use of more than 100 diesel trucks, which ship these goods each day, thereby eliminating their associated greenhouse gas, nitrous oxide, dust and noise emissions. By 2019, it is planned to use the electric vessel for longer journeys and by 2020 it is expected to be ready for autonomous operation, [1].

Even if the future will become truly “electric” everywhere, technologies, such as Kongsberg’s cargo ship remain in the early stages, and synthetic, CO2-based fuels will likely be needed to sustain the world during what would likely be a decades-long transition into the electric economy. A fuel-free world may very well be the ideal in the long-term future, but we will need other fossil-free fuel technologies to sustain society in the meantime. As climate scientists, continue to point out, every year of excessive greenhouse gas emissions counts. We should see Kongsberg’s achievement as a move forward; however, the robustness of the world’s future energy economy will likely lie in its “diversity” as society will need to become more adaptable than ever in the face of the effects of climate change. Flexibility in moving between renewable-electricity-driven and CO2-based-fuel will be a major advantage.

We have always believed ‘never say never’ when it comes to what seem like impossible feats of science and engineering. With Kongsberg’s advance, we are not so sure, fuel oil powered cargo ships will never be electrified and we would not bet the farm that container trucks and planes would not follow suit in the not too distant future, just as we see it happening before our very eyes with electrified cars.

Written by Geoffrey A. Ozin1 and Roland Dittmeyer2