Never-before-seen detail of the center of our galaxy 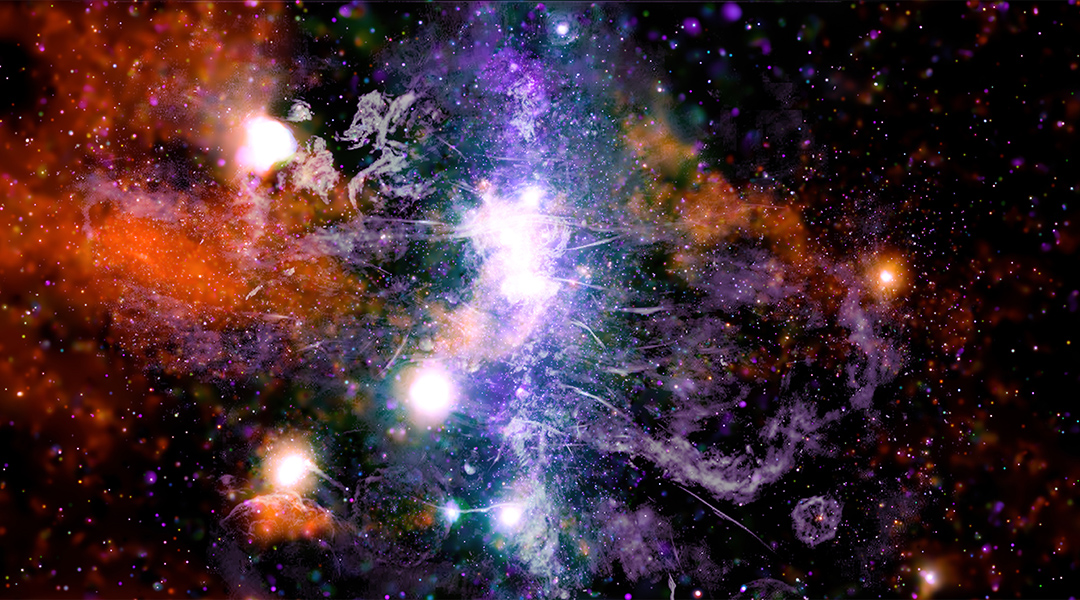 New research by University of Massachusetts Amherst astronomer Daniel Wang reveals, with unprecedented clarity, details of violent phenomena in the center of our galaxy. The images document an X-ray thread, G0.17-0.41, which hints at a previously unknown interstellar mechanism that may govern the energy flow and potentially the evolution of the Milky Way.

“The galaxy is like an ecosystem,” says Wang, a professor in astronomy whose findings are a result of more than two decades of research. “We know the centers of galaxies are where the action is and play an enormous role in their evolution.”

Yet, whatever has happened in the center of our own galaxy is hard to study, despite its relative proximity to Earth, because, as Wang explains, it is obscured by a dense fog of gas and dust. Researchers simply can’t see the center, even with an instrument as powerful as the famous Hubble Space Telescope. Wang, however, has used a different telescope, NASA’s Chandra X-Ray Observatory, which “sees” X-rays, rather than the rays of visible light that we perceive with our own eyes. These X-rays are capable of penetrating the obscuring fog–and the results are stunning.

Wang’s findings, which were supported by NASA, give the clearest picture yet of a pair of X-ray-emitting plumes that are emerging from the region near the massive black hole lying at the center of our galaxy. Even more intriguing is the discovery of an X-ray thread called G0.17-0.41, located near the southern plume. “This thread reveals a new phenomenon,” says Wang. “This is evidence of an ongoing magnetic field reconnection event.” The thread, writes Wang, probably represents “only the tip of the reconnection iceberg.”

A magnetic field reconnection event is what happens when two opposing magnetic fields are forced together and combine with one another, releasing an enormous amount of energy. “It’s a violent process,” says Wang, and is known to be responsible for such well-known phenomena as solar flares, which produce space weather powerful enough to disrupt power grids and communications systems here on Earth. They also produce the spectacular Northern Lights. Scientists now think that magnetic reconnection also occurs in interstellar space and tends to take place at the outer boundaries of the expanding plumes driven out of our galaxy’s center.

“What is the total amount of energy outflow at the center of the galaxy? How is it produced and transported? And how does it regulate the galactic ecosystem?” These, says Wang, are the fundamental questions whose answers will help to unlock the history of our galaxy.

Though much work remains to be done, Wang’s new map points the way. For more information, including additional images and video, visit the Chandra X-Ray Observatory’s Galactic Center website.