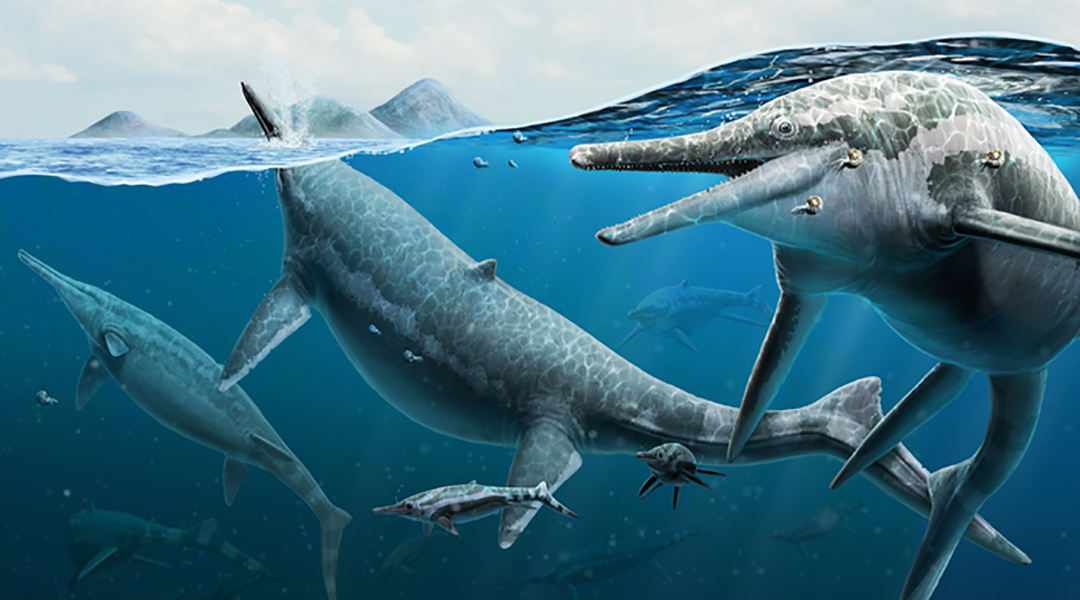 Millions of years before whales sought safe birthing grounds far from where they fed, long-snouted marine reptiles called ichthyosaurs did the same, traveling vast distances to birth their young.

Researchers have been able to make this claim based on extensive fossil beds found in Nevada, United States, whose presence has long perplexed the community.

Since Mary Anning’s discovery of ichthyosaurs in the 1800s, fossils of these extinct sea giants have been found across North America, Europe, and Asia. These creatures traversed the oceans between 250 to 66 million years ago. With their distinctive long snouts, flipper-like appendages, and dolphin-like forms, ichthyosaurs ranged in length from 1 to 20 meters.

On the upper end of that scale, the ichthyosaur, Shonisaurus, was about the length of a school bus — some 11 to 15 meters long — with each individual flipper as long as a person laid flat on the ground. Nearly 40 such Shonisaurus came to be fossilized in present-day Nevada’s Humboldt-Toiyabe National Forest.

What led to this collection of ichthyosaurs?

Since the study of this site by Charles Camp some 50 years ago, various theories for their presence have been the subject of much debate and speculation. What might have led to the existence of the largest collection of ichthyosaur fossils found anywhere else in the world?

In the past, disruptive environmental and beaching events have been implicated but these theories have fallen short of satisfactorily explaining the unusual density of Shonisaurus fossils seen at the Berlin-Ichthyosaur State Park in Nevada.

“You find these giant ichthyosaurs preserved together very closely, meters apart, in many different places in the rock record,” said Nicholas Pyenson, a researcher at the Smithsonian Institution in the United States. “That is to say that it occurred multiple times over a long period of geologic time.” Pyenson and colleagues explored what might have led to these fossils being preserved as they were.

One possible explanation may have been a repetitive, environmental catastrophe, such as persistent volcanic activity in the region. But when researchers sampled the mercury signature of the rocks surrounding the fossils, nothing significant turned up. Since mercury concentration is a proxy for volcanic activity, the lack of a “telltale signal or spike” implies that volcanic activity did not lead to the death and fossilization of the Stronisaurus in Nevada. A similar dearth of signals of past increases in organic activity disproved the presence of harmful algal blooms.

Another old speculation was “maybe all the large ichthyosaurs were the result of a beach stranding, the way whales today strand in many numbers,” said Pyenson. But this explanation came up empty. The ichthyosaur bones appeared to have sank to the depths of the ocean that once covered now-dusty Nevada. Shallow coastal waters that lead to stranding were not present at this location in the past.

“Then you’re left with the argument, ‘okay, so what is creating the kind of mechanism that’s gathering all these skeletons together?’” he added.

Getting to the bottom of things

For their analysis, the team examined fossils at different quarries in the park as well as those in museum collections previously found in the area.

The main draw at the State Park, Quarry 2, is an area that houses the exposed, fragmented fossils of seven ichthyosaurs that seemingly died during the same time period. The researchers carefully measured petrified bones and digitally captured these fossils with both cameras and laser scanners. Using rendering tools that are common to the entertainment industry today, they crafted an accurate 3D model that is also available for public access. “3D digitization can create a precise and undistorted view of the fossils that you’re looking at,” said Pyenson.

Most fossils found at the quarries were adult ichthyosaurs, but the new analysis also revealed the presence of much smaller bones and teeth that once belonged to embryos and neonates of Shonisaurus. Surprisingly, the team found no young ichthyosaurs or other marine vertebrates.

“And that’s where we argued it’s actually a biological mechanism, and it’s a very common one that we see today, that is a feature of the ecology of whales and sharks, which is that they migrate long distances to feed in one place and breed in another,” said Pyenson.

Moreover, the ichthyosaur fossils are preserved in rock layers at different depths, indicative of different timepoints separated by at least thousands of years. Over the course of around 230 million years, ichthyosaurs travelled to this location for the apparent purpose of birthing. The ichthyosaurs may have died during birthing or from some other natural causes, but the reasons remain unclear. “We don’t know,” said Pyenson.

As for Quarry 2, “The fossils never left the ground,” said Pyenson. “And so, anybody can go drive out to central Nevada and go see these fossils. They’re preserved for anybody to see.”

Moreover, with the fossils now forever digitized and open access, people around the world can look at the old bones of Shonisaurus. “It’s a way of what I would call shared stewardship to enhance the preservation of the actual objects while creating digital versions of it. It can be shared across the world,” added Pyenson.

With more completely preserved skeletons now found, researchers hope to better understand the biology of ichthyosaurs. Pyenson is keen to study the ecology of marine giants at other sites around the world with similar fossil densities.