The first mission to Jupiter's Trojan asteroids will show us the diversity of the primordial bodies that built our Solar System. 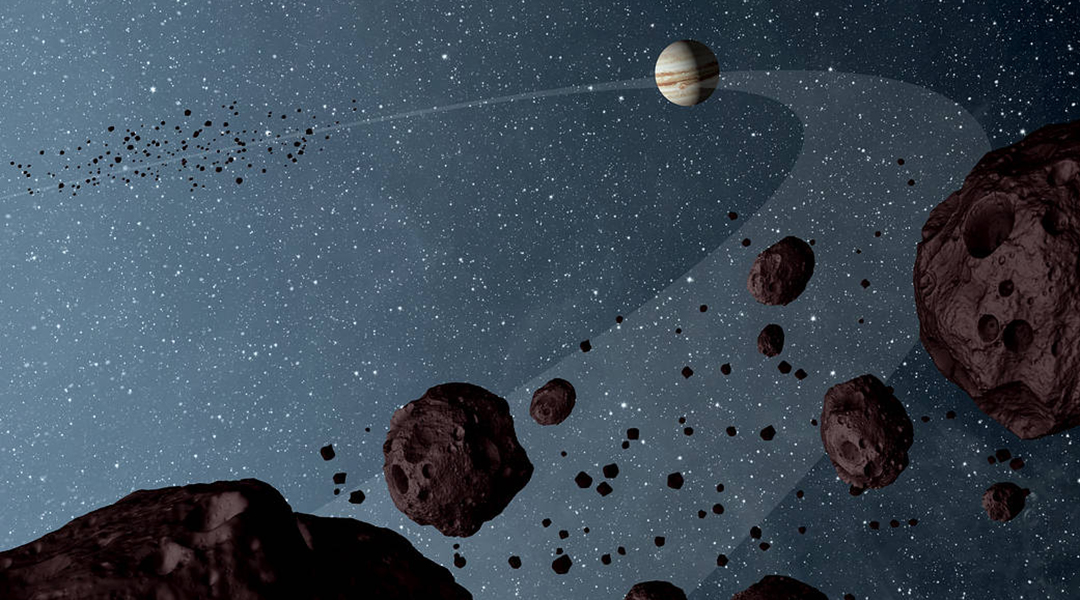 In October of this year, NASA plans to launch the first spacecraft to explore the Trojan asteroids — two loose groups of asteroids orbiting our Sun, with one group leading ahead of Jupiter, and the other trailing behind.

The mission named “Lucy” — after the fossilized human skeleton, Lucy, which provided unique insight into humanity’s evolution — will seek to determine what secrets these “swarms” of asteroids contain with regards to the birth of our Solar System more than 4 billion years ago. They are thought to be remnants of the primordial material that formed the outer planets, which NASA scientists believe will provide vital clues to deciphering the history of the Solar System, and perhaps even the origins of organic material on Earth.

Origins of the Solar System

There are a number of theories for the origin of the Solar System, one of which speculates that it was triggered by the collapse of a giant cloud of gas and dust, forming a spinning, swirling disk of material called a solar nebula. Its been postulated that this collapse could have been as a result of random density fluctuations within the cloud or an external force, such as a shock wave from a nearby supernova.

At the center of the solar nebula, intense pressure would have resulted in the fusion of hydrogen atoms into helium, a process which releases enormous amounts of energy. As such, our Sun was born.

Material on the outside of the disk began to condense, forming larger and larger bodies, some of which grew large enough that their own gravity shaped them into spheres, becoming planets, dwarf planets, and moons. Matter that did not come together became asteroids, comets, and meteoroids.

Getting Lucy in the sky

The first of the Trojan asteroids were discovered as early as 1906 by German astronomer Max Wolf. With advancements in observational instruments resulting in more than 6,500 identifications as of 2017. But despite this plethora of discoveries, scientists actually know very little about these asteroids orbiting with Jupiter.

Over its twelve-year primary mission, Lucy will explore a record-breaking number of asteroids, flying by one main belt asteroid and seven Trojan asteroids. Lucy also incorporates three Earth-gravity assists to reach the Trojan swarms and accomplish these targeted encounters.

“No other space mission in history has been launched to as many different destinations in independent orbits around our sun,” wrote NASA scientists. “Lucy will show us, for the first time, the diversity of the primordial bodies that built the planets. Lucy’s discoveries will open new insights into the origins of our Earth and ourselves.”

From close range, Lucy will gather data on the surface composition, surface geology, and the interior and bulk properties of targets 3548 Eurybates, 15094 Polymele, 11351 Leucus, and 21900 Orus in the L4 Greek Camp, plus 617 Patroclus and its binary companion, Menoetius, plus one main belt asteroid named 52246 Donaldjohanson.

The spacecraft was recently transported from Buckley Space Force Base in Aurora, Colorado, aboard a U.S. Air Force C-17 cargo plane. Over the weekend, the team transferred the spacecraft from its shipping container into the Astrotech cleanroom and performed post-ship inspections, confirming that Lucy arrived in good condition. The spacecraft is now ready to begin its final round of testing and pre-launch checks, which include software tests, instrument and powered functional tests, propulsion propellent load tests, telecommunication tests, and spacecraft self-tests.

“It is hard to believe that we are finally here after over seven years of hard work,” says Hal Levison, Lucy’s principal investigator from Southwest Research Institute in Boulder, Colorado. “We would not have made it without an extremely talented and dedicated team. It’s now time to get Lucy into the sky so that it can deliver its revolutionary science about the origin of our planetary system.”