Uranus, its moons, and rings are all "tipped", suggesting they formed during a cataclysmic impact early in its history. 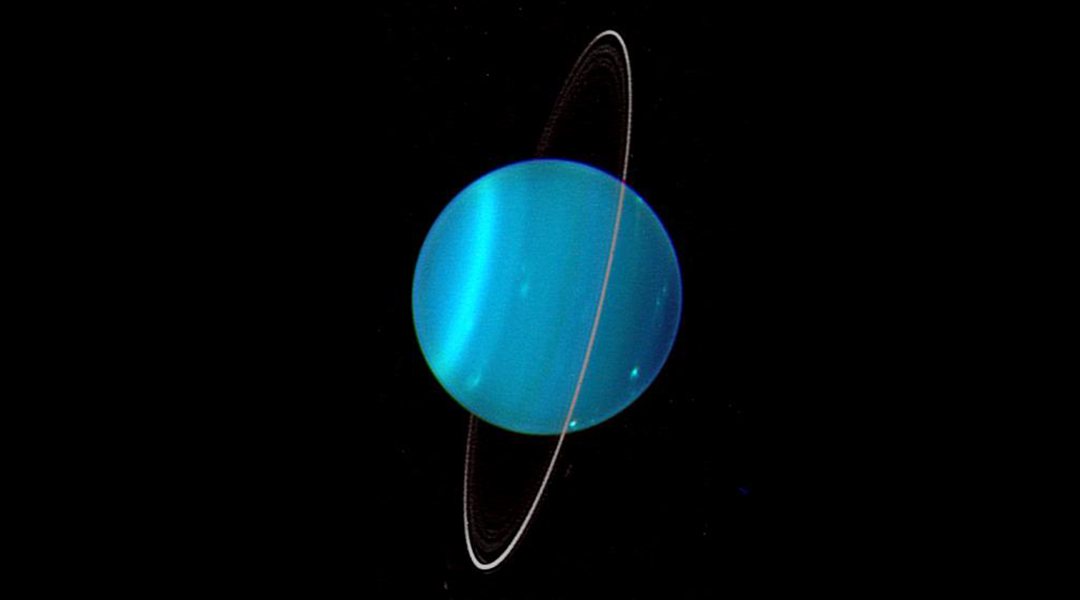 Uranus has puzzled scientists for decades, rotating essentially on its side with its pole pointing almost directly at the Sun. Like Saturn, Uranus also has a ring system and 27 moons, all of which orbit the planet’s equator and are “tipped over” too. Many astronomers have theorized the reason for this unique and unusual orientation, but now a research team led by Professor Shigeru Ida from the Earth-Life Science Institute (ELSI) at Tokyo Institute of Technology suggests that early in the history of our Solar System, Uranus was struck by a small icy planet roughly 1-3 times the mass of the Earth.

According to the study, the team came to this conclusion while constructing a novel computer simulation of moon formation around icy planets. According to the researchers, Uranus’ ring and moons provided the evidence they needed to unravel the planet’s oddities.

Moons are not uncommon in our Solar System, and are present in a range of sizes, orbits, compositions, and other properties, which have helped scientists determine how they formed. For example, our own Moon is thought to have formed around 4.5 billion years ago when a Mars-sized planetoid collided with a smaller proto-Earth. These types of collisions were common during the formation of the Solar System, according to the authors, but Uranus must have experienced something different, which they believe has to do with its composition.

The outerplanets are largely composed of volatile elements, like frozen water and ammonia, as the environment in which they formed was colder than planets like Earth, which formed from non-volatile elements due to its proximity to the sun. The differing composition of the planets would result in different consequences after impact with another celestial body. For example, water freezes at a (relatively) low temperature, so the team believes that any impact with icy Uranus in the early Solar System would have vaporized any ice debris that might have formed — meaning this debris would remain in a gaseous state longer, resulting in smaller moons as there is less debris to collect and build them. The team highlights that the ratio of Uranus’ mass to Uranus’ moons’ masses is greater than the ratio of Earth’s mass to its moon by a factor of more than a hundred, and their new model is able to accurately reproduce this.

According to Ida, “This model is the first to explain the configuration of Uranus’ moon system, and it may help explain the configurations of other icy planets in our Solar System such as Neptune. Beyond this, astronomers have now discovered thousands of planets around other stars, so-called exoplanets, and observations suggest that many of the newly discovered planets known as super-Earths in exoplanetary systems may consist largely of water ice, and this model can be applied.”