Motion capture in clinics: From Hollywood to healthcare

The Hollywood technology that brings impossible creations to life onscreen could bring better, fairer care to patients around the world. 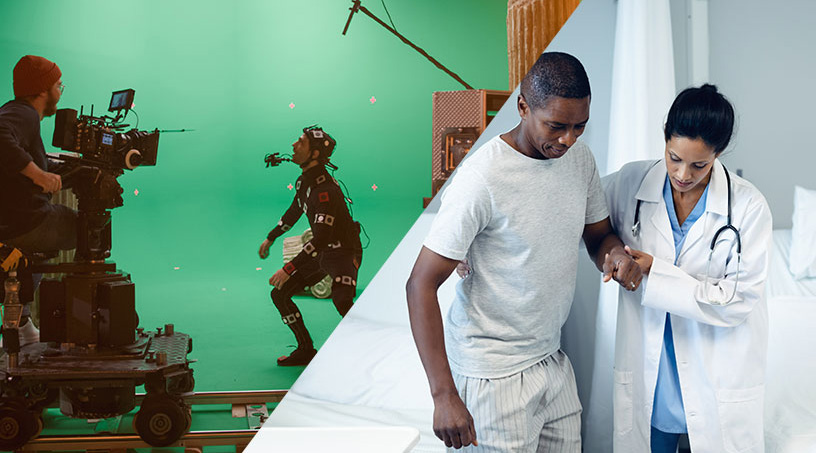 Motion capture technology has allowed actors’ performances to be translated into marvelous monsters and charismatic creatures in blockbusters from Avatar to the Lord of the Rings. Researchers and doctors have long hoped to harness this approach in the clinic to help analyze patient movement and improve diagnosis and care for all forms of motor conditions.

But Hollywood budgets and healthcare resources don’t always align. New developments to strip back the technology, however, may be making it a reality.

Conventional motion capture requires participants to wear bright white, ball-like markers all over the body, which multiple cameras track from several angles. This approach means specialist setups, expert technicians, and willing participants, so in healthcare, its use has been restricted to dedicated (and well-funded) labs. It is used currently in detailed surgery planning for young cerebral palsy patients, but access is limited.

All that might be about to change, with developments that could bring motion capture technology to not just a hospital near you, but your living room and low-resource healthcare settings around the world. Single camera motion capture aims to achieve comparable results with any video camera — like the one on your phone — and without any carefully positioned markers or clunky suits.

In practice, but not yet perfect

A recent study in PLOS Digital Health asked whether such a technology could help with assessment of osteoarthritis patient movement — a key characteristic of the condition but one that conventional methods struggle to evaluate without specialized kit and personnel. They found a reliable method for distinguishing patient populations in ways conventional assessment could not. And this is just the start.

“The idea is to use this technology to replace the traditional methods of movement assessment that are used in labs and clinics currently,” said Bradley Scott, a Ph.D. candidate in markerless motion capture technology at the University of Aberdeen and lead author of a review in PeerJ. “The real benefit is that we could provide motion capture for everyone.”

The potential uses are far-reaching. Imagine constant feedback on your at-home exercises during recovery from an injury, making sure you’re moving in the right way each time rather than waiting for your next physio visit. “That could be even more powerful in resource poor settings where rehab isn’t always given as much attention as it needs,” added Scott.

Continuous assessment of a Parkinson’s patient’s movement could mean carefully adjusted parameters to make progress as strong as possible. Removing the need for markers and complex setups could bring the technology to infants or people who experience seizures, where markers might fall off or be impractical over extended periods of time. In care homes, where residents can’t be watched constantly and falls can go unnoticed for hours, trials of camera setups are underway that identify the motion of a fall, and alert staff instantly.

That, however, raises a key question about widening access to motion capture technology, particularly with vulnerable populations: privacy.

Would you be comfortable with a constant camera recording of you, feeding an algorithm to ensure your safety? Do you trust doctors, healthcare providers, or private companies with recordings of yourself? This is a fundamental issue with increased use of motion capture, but there are steps we can take to alleviate some of the risks.

“There are systems in place to remove the identity from a video, so it’s more of a segmentation task and recording, and the data recorded and stored doesn’t have any identifiable features,” explained Scott. The system can break recordings down to fundamental shapes rather than high fidelity video that might be exploited.

There are also some practical barriers to overcome before the tech can truly find widespread adoption. 3D recording and complex setups naturally provide much greater detail, so precision planning for surgery and subtle analysis is out of reach of low-fi single-camera techniques. Instead, it is most powerful for more regular movements, where straightforward tracking of one or two points per joint is sufficient.

“Gait is easier to analyze because it’s very cyclical in nature,” said Scott. “It’s repetitive, and there are only so many ways you walk in a straight line. Complex upper limb tasks are extremely difficult because there are so many different ways you can approach even something like reaching for a cup, with different joint rotations.”

The technology itself is still developing. These systems are built on artificial intelligence networks which must be trained with as many example datasets as possible — both of healthy individuals and those with various conditions.

This is particularly tricky in disease populations that are less common or well-studied. If that information could be accumulated, it would not just feed the algorithms but also boost our understanding of disease progression and help spot early signs of disorders ranging from arthritis to Alzheimer’s.

For now, the research community is best placed to walk the tightrope of ethics, privacy, and progress, and so are leading the way in terms of obtaining essential data. But could the exponential rise in wearable biomonitors lead to more widespread motion capture uptake, asks Scott.

“Everyone has the potential in their pockets to capture data that could track their own progression for early diagnosis and prevention for themselves and the wider community,” he said. Again, the privacy implications of this are, inevitably, the major concern.

The technology already exists to make tangible improvements to many aspects of healthcare without huge expense, but much of it is hidden in complex algorithms and unpolished user interfaces. To reach clinicians and patients there is work to be done closing the gap between leading edge computer science and everyday usability. After all, if everyone from a rehab nurse to new parents are going to monitor physiological changes over time, the system must be easy to use and lightweight enough to run on simple operating systems like our phones.

But as the training data grows, the experimental use cases continue to accumulate, and the ubiquity of video-recording smartphones reaches all corners of the globe, motion capture could improve lives, as well as blockbuster films.