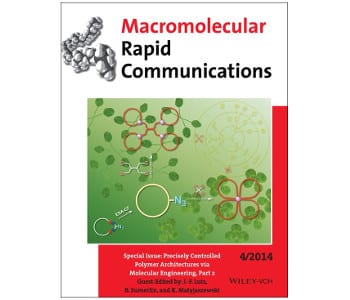 This themed issue follows a first opus that was published earlier this year (issue 2, 2014) with the same guest-editors. Overwhelmed by the great interest of the invited authors it was quickly becoming evident that a single issue was not sufficient to give a comprehensive and coherent view of the whole field of macromolecular engineering. The contributions to the special issues discuss versatile new synthetic routes that lead to excellent control of molecular weight, chain architecture, and functionality. Others describe simplified or more efficient routes to controlled-sequence or complex topologies that once required tedious syntheses.

An impressive list of top authors from around the globe has contributed to these two special issues that will hopefully serve as a benchmark for the state of the art of macromolecular engineering.