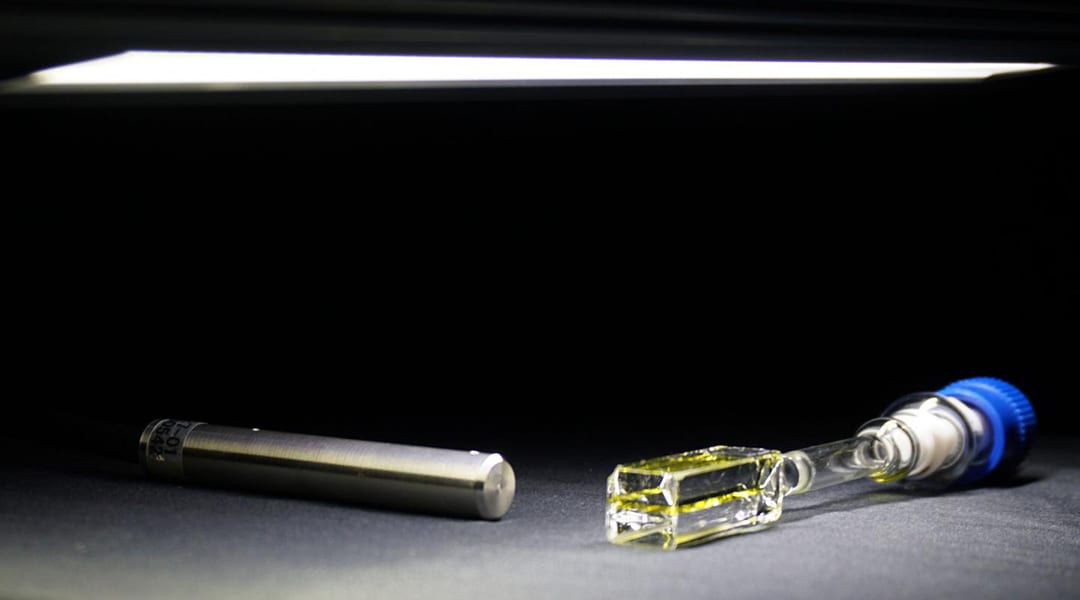 Light-powered processes from hydrogen production to air purification could see a boost in performance under ambient light thanks to a new material system that can directly convert visible light into ultraviolet light with an efficiency that doubles previous records.

Developed by researchers at Kyushu University, the system achieves a light upconversion efficiency of 20% at high intensities and maintains relatively high performance even under weak light, making it promising for harnessing visible light already around us to drive applications requiring high-energy ultraviolet light.

While people often try to avoid ultraviolet light because of the damage it can do to skin, Nobuhiro Yanai, associate professor of Kyushu University’s Faculty of Engineering, has been searching for ways to increase the number of these high-energy rays to power photocatalysts that enable a variety of useful reactions from producing hydrogen for use in fuel-cell vehicles to purifying indoor environments.

“Although dedicated light sources such as ultraviolet LEDs can be used to drive these reactions, they consume energy and increase complexity,” explained Yanai. “Instead, a much more elegant solution is to harvest the sunlight and indoor ambient light that is already all around us.”

However, these ambient light sources generally have a large portion of their energy in the lower-energy visible region and only a fraction of it in the ultraviolet, so researchers have been searching for ways to directly convert visible light with wavelengths longer than 400 nm into higher-energy ultraviolet light.

To do this, the research team led by Yanai and Nobuo Kimizuka has been focusing on a process called triplet-triplet annihilation. In this process, energetic states called triplets are formed on molecules following absorption of visible light. These “donor” molecules then give their triplets to “acceptor” molecules that can combine two triplets to create a single, higher-energy state that is released as ultraviolet light.

Until recently, the maximum reported efficiency of conventional upconversion from visible to ultraviolet light using triplet-triplet annihilation was about 10% and could only be achieved with visible light 1,000 times more intense than sunlight.

Yanai and his group now report in the journal Angewandte Chemie International Edition that they have smashed this record while also achieving greatly improved efficiencies under weak visible light from the sun and indoor LEDs.

“We have been trying to improve the efficiency of this process for more than five years, but we had been stuck at around 5%,” says Yanai. “We finally were able to make a major leap through a new molecular design, which gave us the right molecules for excellent performance.”

Poor efficiency of triplet-triplet annihilation by the ultraviolet-emitting acceptor molecules and quenching of the generated ultraviolet emission by the triplet-creating donor molecules have been two key issues limiting performance.

An acceptor molecule to save the day

To overcome these problems, the researchers developed a novel acceptor molecule, named TIPS-naphthalene, that has a high triplet-triplet-annihilation efficiency and a low enough triplet energy to easily accept triplets from a molecule called Ir(C6)2(acac), a superior donor they previously found that does not strongly absorb the upconverted ultraviolet emission.

The combination of TIPS-naphthalene and Ir(C6)2(acac) successfully achieved the highest upconversion efficiency of 20.5% under high-intensity light.

Furthermore, the system also succeeds in significantly lowering the intensity of the excitation light required compared to conventional systems, achieving upconversion efficiencies of about 10% even at intensities similar to those of sunlight.

“This system can efficiently convert very low-intensity visible light to ultraviolet light. I was very surprised that we were able to obtain ultraviolet light even with the LEDs that I usually use at my office desk,” comments Yanai.

The researchers attribute this performance to rigid bonding of the TIPS groups to the naphthalene center of the acceptor molecule helping suppress internal molecular movement that leads to energy losses and the TIPS groups themselves finely tuning the molecule’s triplet energy while keeping the emission in the ultraviolet.

In addition to finding ways to continue to improve efficiency, the researchers are also exploring how to get the system to perform just as well out of solution to further simplify its application to a variety of light-driven processes.

Dissecting molecular vibration
Searching for a needle in the haystack: Fast screening for new catalysts
Unique insights afforded to us by computational chemistry
Towards long-lasting lithium-sulfur batteries