Cathepsin B molecular imaging has been shown to be a powerful tool in reflecting the potential of cartilage formation and predicting the quality of cartilage. 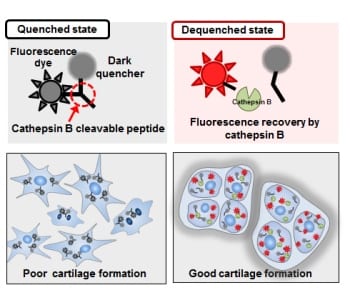 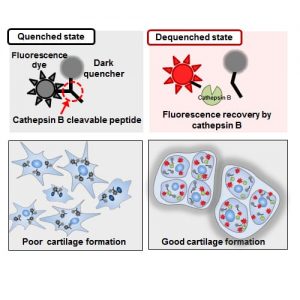 Molecular imaging has emerged as an innovative technique for the evaluation of disease progression and the effect of therapy. The clinical benefits of this technique are early disease detection. Molecular events that drive disease processes can be examined in a noninvasive way. A molecular imaging probe consists of a targeting and a signaling component. While the targeting moiety interacts with the key protein or other molecules of interest, the signaling part allows detection of these interactions from the outside. A variety of molecular imaging probes has been developed, and molecular changes of diseases can be visualized to provide biological information about pathological lesions.

Cathepsin B molecular imaging probes have been widely applied for the diagnostic imaging of cancers and arthritis, due to the cathepsin B overexpression under these disease conditions. However, recent studies have shown that three-dimensionally (3D) cultured chondrocytes within biomaterials also produce high levels of cathepsin B during cartilage formation.

Researchers from the Korea Institute of Toxicology (Daejeon, Korea) and Korea Institute of Science and Technology (Seoul, Korea) describe the application of cathepsin B-specific molecular imaging probes in 3D cultured chondrocytes. The probe was composed of a cathepsin B cleavable, peptide-linked fluorescence dye and a dark quencher. Cathepsin B activity increased significantly during cartilage formation of the cells seeded in the 3D scaffolds and chondrocytes with a high cathepsin B expression showed more extensive cartilage formation. Cathepsin B molecular imaging proved to be a powerful tool in directly reflecting the potential of cartilage formation, predicting the quality of tissue-engineered cartilage before the actual transplantation.

Being highly sensitive and highly specific while showing negligible cytoxicity, the cathepsin B molecular imaging probe was able to visualize the feasibility of cartilage formation without damaging the cells in the 3D scaffolds. This method is expected to provide a reliable prediction for the quality of bioengineered cartilage in orthopedic applications.