Mimicry in Butterflies: The Muse, the Palette and the Artist

A caterpillar prepares for its legendary transformation from a pupa into a colorful butterfly. Through this metamorphosis, a bag of developmental genetic tricks lays down bright color patterns that help the butterfly attract its mates and warn or fool its predators. 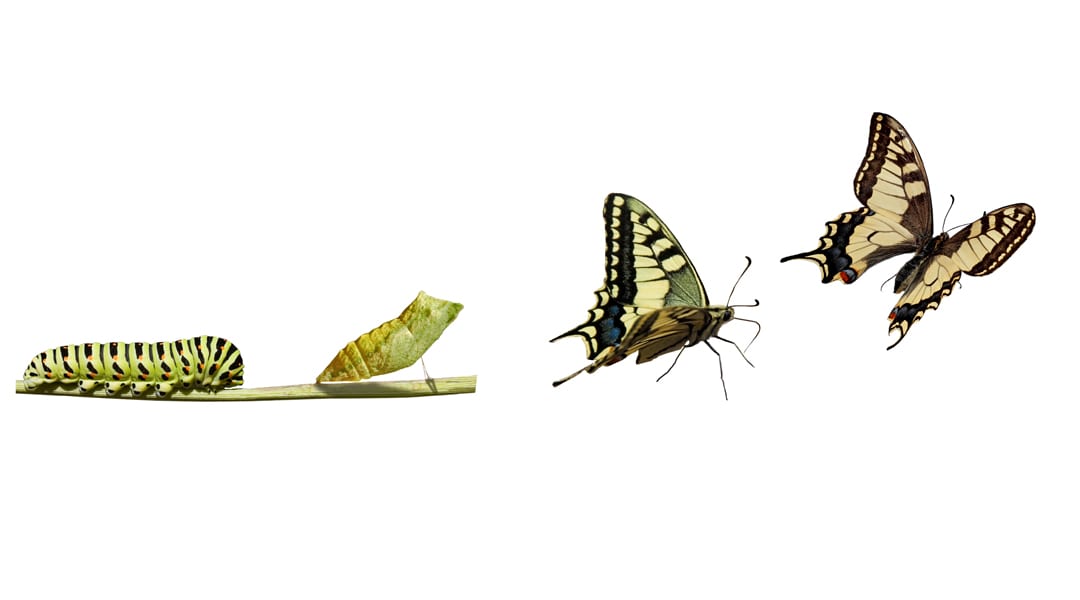 A caterpillar prepares for its legendary transformation from a pupa into a colorful butterfly. Through this metamorphosis, a bag of developmental genetic tricks lays down bright color patterns that help the butterfly attract its mates and warn or fool its predators.

Few adaptations in nature are as striking and widely appreciated as the bright wing color patterns of butterflies. These color patterns have evolved to serve crucial functions, including predator avoidance through warning coloration and mimicry. Mimicry is the phenomenon of gaining protection from predation by resembling toxic prey species that experienced predators avoid. Mimicry in butterflies has been intensively studied for several decades, but now the rapidly expanding field of genetics of wing patterning has made butterflies emerging model organisms for developmental genetic research.

Researchers have studied many butterfly species, each representing a different type of mimicry or wing pattern. This has provided tremendous knowledge about their behaviour and genetics, but has hindered generalization because the role of different genes was validated in different species. In a new synthesis published in the journal WIREs Developmental Biology, evolutionary geneticists from the National Centre for Biological Sciences (NCBS), India, have pieced together a comprehensive picture of the puzzle of the genetics of wing patterning. The synthesis points to co-option as an emerging theme, whereby genes with other developmental functions have been recruited to form novel colors and patterns on butterfly wings. The authors draw attention to some novel concepts such as master regulator supergenes that might control wing color polymorphisms. They also highlight neglected but important phenomena such as asymmetry in wing color patterns that have significant evolutionary implications. “A comprehensive and beautifully illustrated synthesis such as this is an invaluable resource for the wide community of developmental biologists”, remarked Prof. Nipam Patel, an accomplished developmental geneticist at the University of California, Berkeley, who was not part of this study.

Several genes have been identified that regulate wing patterns and/or mimicry in butterflies. These genes mostly comprise of transcription factors that regulate the activity of other genes. Genes can sometimes be expressed in new tissues, or at different developmental times, giving rise to novel phenotypes and functions. When this happens, a gene is said to be “co-opted” for the novel function. Co-option is the predominant theme in butterfly wing color patterning as the newly identified genes perform very different functions in butterfly wing discs compared to their traditionally known role in other insects such as fruit flies. For example, the gene optix is associated with formation of the eye in the fruit fly. In Heliconius butterflies, optix has been co-opted to control red pigmentation on the wings instead, affecting important aspects of mimetic coloration. A very long list of genes that control body axes formation, segmentation and sex determination in insects have similarly been co-opted to control bands, spots and other wing color patterns in mimetic butterflies such as Papilio swallowtails and other butterflies such as Bush-browns (Bicyclus) and the Painted Lady (Vanessa cardui). “Co-option of genes in different developmental contexts may be the main driver of phenotypic novelty in butterfly wing color patterns, giving rise to new functions at the molecular level and complexity at the organismal level”, said Dr. Krushnamegh Kunte, a faculty member at NCBS and the senior author of the paper.

Another fascinating feature of mimetic butterflies is the differential pattern seen on the dorsal and ventral wing surfaces. Different patterns on the two wing surfaces can enable butterflies to signal to potential mates and/or warn predators with bright patterns on the dorsal surfaces, while at the same time maintaining camouflaging patterns on the ventral surfaces to avoid detection by predators. How do they achieve this? Ms. Riddhi Deshmukh, the lead author of the paper and a PhD student at NCBS, took a stab at this question by reconstructing the molecular pathway that initiates dorso-ventrally mismatched wing color patterns in butterflies. “The gene apterous determines which cells from the developing wing form the dorsal half of the adult wings. The complete pathway of action of this gene has not been studied in butterflies, but differential expression of this gene may be the first step in determining the asymmetry in wing color patterns”, predicts Ms. Deshmukh. The action of this gene might relay into pattern and pigment forming pathways, controlling their differential expression on dorsal versus ventral wing surfaces.

This paper provides incisive insights into the developmental genetic mechanisms that facilitate the evolution of novel butterfly wing color patterns. However, the authors also highlight some intriguing examples of mimicry in highly polymorphic butterfly species, the genetic bases of which yet remain unresolved. “There are many evolutionary enigmas and developmental genetic mysteries that can be addressed with these fascinating creatures that provide such rich biological detail and diversity of color patterns”, Dr. Kunte pointed out. With rapid advances in sequencing technologies and increasing access to genome editing techniques in butterflies, we might be on the cusp of illuminating long-held mysteries of the mind-boggling diversity of wing color patterns in butterflies.

Citation of the paper:

Nature's metal organic frameworks
What are the ethical considerations for wearable technology?
Nanobots used for better root canal treatment
A farewell to our colleague and friend, Jenna Flogeras