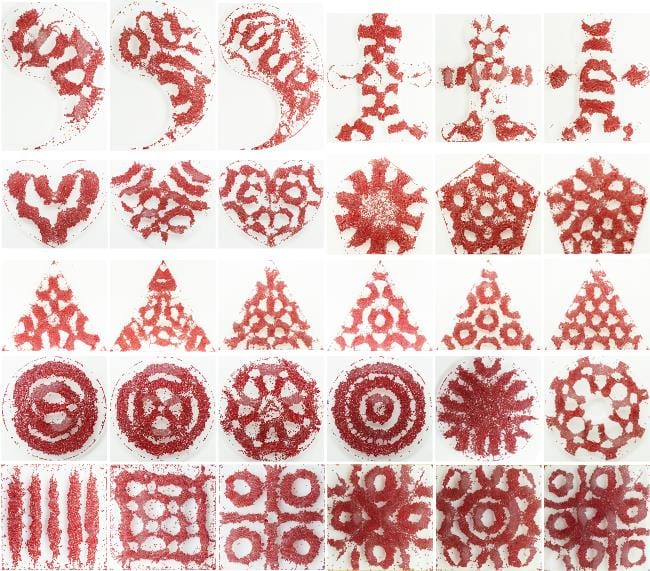 The complex patterns that are produced by Faraday waves (nonlinear standing waves on a vertically vibrated liquid surface) have been exploited as reconfigurable liquid templates for the assembly of diverse microscale materials. This approach taken by researchers at Stanford University represents an exciting new paradigm for the manufacture of complex microstructures, with a particularly promising outlook for tissue engineering and neuroscience.

For applications in fields such as tissue engineering, microphotonics, and microelectronics, cost-effective, fast, and reconfigurable microscale assembly methods are highly desirable. The method reported by Prof. Demirci’s team is based on the fact that very small particles on a liquid surface are driven to either nodal or antinodal regions of the standing wave depending on their contact angle (particles with a low contact angle are typically driven to the nodes, whereas those with a large contact angle cluster at the antinodes). A clear demonstration of this concept is shown above with poly(styrene-divinylbenzene) beads assembling at the pressure nodes (red, upper row), Cu-Zn powder assembling at the pressure antinodes (green, middle row) and the partition of both particles (bottom). The color maps are the corresponding drift energies simulated for the polymer and Cu-Zn particles (particles are driven to regions of low drift energy). 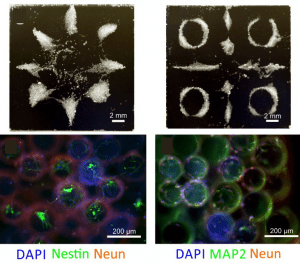 Assembled structures from cell spheroids (above) and formation of 3D neural structures on the assembled microcarrier beads after 14-day cell culture (below).

The technique can be used to assemble a range of soft, rigid, and biological materials. Most notably, this allows the engineering of 3D networks with both controllable shape and cytocompatibility without need of a scaffold. An example of this can be seen in the figure above, depicting the assembly of the microcarrier beads seeded with fibroblast cells (upper panels) and the formation of 3D neural networks after cell culture (lower panels). For tissue engineering, this offers a clear advantage over cumbersome existing methods based on picking and placing of the cell spheroids.