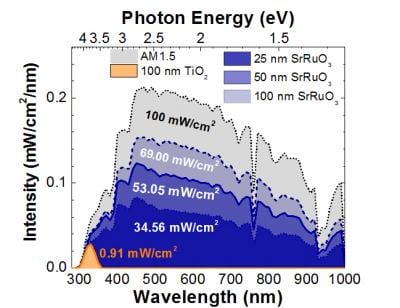 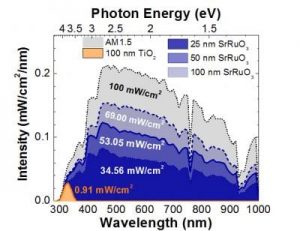 The correlated electron “metal” SrRuO3 exhibits strong visible slight absorption. Overlaid here on the AM1.5G solar spectrum, it can be seen that SrRuO3 absorbs more than 75 times more light than TiO2. The structural, chemical, and electronic compatibility of TiO2 and SrRuO3 further enables the fabrication of heterojunctions with exciting photovoltaic and photocatalytic response driven by hot-carrier injection. Lane Martin, University of Illinois.

“When designing next generation solar energy conversion systems, we must first develop ways to more efficiently utilize the solar spectrum,” explained Lane Martin, whose research group at the University of Illinois at Urbana-Champaign has done just that.

“This is a fundamentally new way of approaching these matters,” said Martin, who is an assistant professor of materials science and engineering (MatSE) at Illinois. “From these materials we can imagine carbon-neutral energy production of clean-burning fuels, waste water purification and remediation, and much more.”

Martin’s research group brought together aspects of condensed matter physics, semiconductor device engineering, and photochemistry to develop a new form of high-performance solar photocatalyst based on the combination of the TiO2 (titanium dioxide) and other “metallic” oxides that greatly enhance the visible light absorption and promote more efficient utilization of the solar spectrum for energy applications.

According to Martin, the primary feature limiting the performance of oxide-based photovoltaic and/or photocatalytic systems has traditionally been the poor absorption of visible light in these often wide band gap materials. One candidate oxide material for such applications is anatase TiO2, which is arguably the most widely-studied photocatalyst due to its chemical stability, non-toxicity, low-cost, and excellent band alignment to several oxidation-reduction reactions. As the backbone of dye-sensitized solar cells, however, the presence of a light-absorbing dye accounts for a large band gap which limits efficient usage of all but the UV portion of sunlight.

“We observed that the unusual electronic structure of SrRuO3 is also responsible for unexpected optical properties including high absorption across the visible spectrum and low reflection compared to traditional metals,” stated Sungki Lee, the paper’s first author. “By coupling this material to TiO2 we demonstrate enhanced visible light absorption and large photocatalytic activities.”

“SrRuO3 is a correlated electron oxide which is known to possess metallic-like temperature dependence of its resistivity and itinerant ferromagnetism and for its widespread utility as a conducting electrode in oxide heterostructures,” Lee added.

Referring to this material as a “metal,” however, is likely inappropriate as the electronic structure and properties are derived from a combination of complex electronic density of states, electron correlations, and more.

Using a process called photo-excited hot-carrier injection from the SrRuO3 to the TiO2, the researchers created new heterostructures whose novel optical properties and the resulting high photoelectrochemical performance provide an interesting new approach that could advance the field of photocatalysis and further broaden the potential applications of other metallic oxides.

This work provides an exciting new approach to the challenge of designing visible-light photosensitive materials and has resulted in a provisional patent application. The work was primarily supported by the ongoing the International Institute for Carbon Neutral Energy Research (I2CNER) program, a partnership between Kyushu University in Japan and the University of Illinois.

“The I2CNER project brings together some of the leading energy researchers from around the globe,” explained I2CNER Director Petros Sofronis, who is also a professor in the Department of Mechanical Science and Engineering at Illinois. “Results from Dr. Martin’s research group and others demonstrate that I2CNER is not only an experiment on international collaboration. It is a concerted institutionalized effort to pursue green innovation and reduced CO2 emissions, as well as to advance fundamental science and develop science-based technological solutions for the reorganization of sustainable and environmentally friendly society.”

A trip to Oz and a peek behind the curtain of magnesium batteries
Making water-splitting for hydrogen storage 50 times more efficient
Dual aluminum-nitrogen battery that stores energy and fixes nitrogen
What would a room temperature superconductor mean for the energy sector?