Scientists at ICFO develop a new organic photovoltaic cell which is more efficient at producing energy . 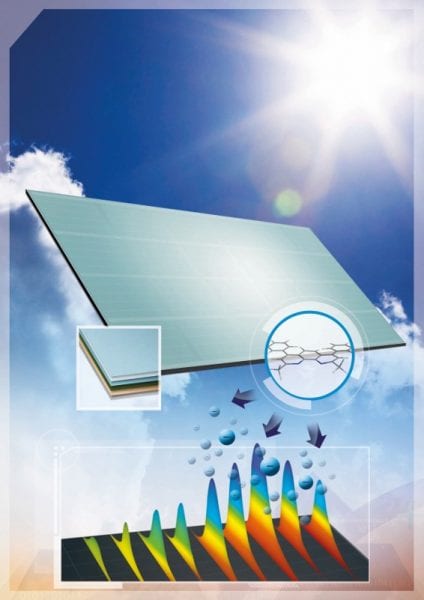 Adapt to all surfaces and reduce production costs; these are the two main advantages of organic photovoltaic solar cells, a technology that could revolutionize the way we produce the energy we consume. Light, translucent and sensitive to low light levels, photovoltaic solar cells open a whole new range of possibilities which traditional solar cells cannot offer.  These attractive properties make them one of the most appropriate technologies for the development of photovoltaic power production units integrated into our daily lives. That being said, their efficiency levels are still below that of standard solar cells and scientists are working to improve this crucial aspect in order to commercialize this new technology.

Researchers from the Institute of Photonic Sciences (ICFO) have developed a new type of organic photovoltaic cell with energy efficiency levels that very few laboratories in the world have achieved.  The group led by Prof. Jordi Martorell has managed to optimize to 8.1% the percentage of energy harnessed. These results represent an important step forward for the development and future commercialization of this technology. “Incorporating a nano-layer of highly transparent material into the architecture of the cell, we managed to increase capabilities for collecting solar photons.  Although this change of material has required more than a year of detailed work in order to optimize the organic photovoltaic cells, the results have led to fabrication of devices with an efficiency level similar to those obtained by other groups that are at the forefront of global research in this field, “said Martorell.

Conventional solar cells currently on the market have an average efficiency of between 10% and 15%. These are made of a thin layer (about 200 microns) of silicon doped with chemicals to form a bilayer structure called pn junction. When photons of light are absorbed by the silicon, electrons flow through this junction, creating a small electric current.

Alberto Martinez-Otero, ICFO postdoctoral researcher and co-author of the study, explains that “the devices we have developed are characterized by the introduction of a transparent layer of organic molecules between the active materials and the rear electrode.  This layer gives the device a higher reflective capacity, resulting in increased capability for trapping solar photons “. These photons are then converted into electricity through the photoelectric effect.

The next challenge of this research team is to extend the use of this organic material into cells with architectures tailored to achieve semi-transparent devices. “Our goal is to design solar cells that can be integrated into buildings, windows, cars or screens as a new source of clean energy with reduced contaminating emissions,” concludes Martorell.