Professor Leroux and colleagues investigated the translational potential of liposome-supported peritoneal dialysis (LSPD) for the treatment of hyperammonemia-induced encephalopathy.

Hyperammonemia, predominantly resulting from inherited or acquired impairments in hepatic detoxification (e.g. urea cycle disorders, cirrhosis), plays a key role in the onset of encephalopathy. It leads to a number of neuropathological changes, culminating in brain edema and cerebral dysfunctions which can quickly progress to coma and death, if not adequately treated. As of today, the poor prognosis associated with this condition reflects the lack of valuable ammonia-lowering therapies. Extra-corporeal dialysis, the current standard of care for treating severe hyperammonemic crises, suffers indeed some important drawbacks as it can be risky, technically difficult to implement and not readily available in community hospitals. Peritoneal dialysis (PD), a less invasive and easier to perform treatment, might be a valuable alternative but its clinical use has been hampered so far due to limited ammonia clearance capability. 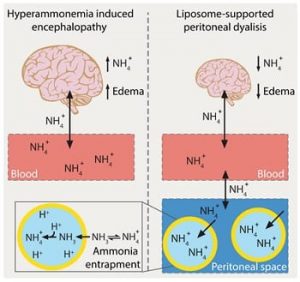 Professor Leroux and colleagues investigated the translational potential of liposome-supported peritoneal dialysis (LSPD) for the treatment of hyperammonemia-induced encephalopathy. This detoxification strategy relies on the peritoneal instillation of giant, transmembrane pH-gradient liposomes with an acidic core, which can efficiently scavenge ammonia before being recovered, together with their toxic cargo, at the end of the dialysis. LSPD fluids were extemporaneously prepared via an innovative, osmotic shock-based method suitable for clinical implementation. In vivo studies in appropriate animal models demonstrated the effectiveness of the LSPD fluid, which outperformed conventional peritoneal dialysis in extracting ammonia and attenuating brain edema, and innocuousness of the liposomal formulation. These findings clearly point to LSPD as a novel effective and safe ammonia-lowering strategy for the treatment of hyperammonemia-induced encephalopathy.