Lightweight Construction with no Aluminum or Carbon 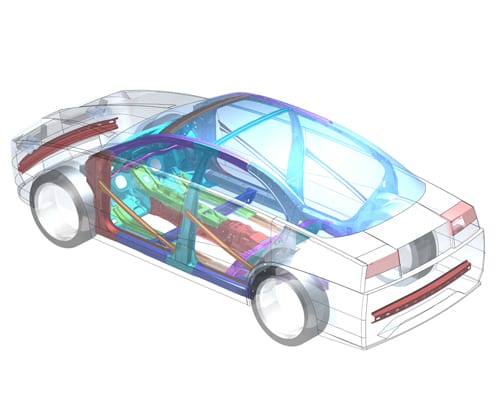 For ten years voestalpine have investigated and improved their patented product phs-ultraform (press hardened steel). Now further progress has been made. Peter Schwab, R&D Director for the voestalpine Group, has announced that, for the first time, press-hardened components made of phs-ultraform can be manufactured using a direct process with simultaneous cathodic corrosion protection. At present, the company is the only manufacturer able to produce phs-ultraform components using either the traditional indirect or new direct process.

Phs-ultraform components combine the advantages of high-strength yet lightweight components with the proven corrosion protection of galvanized steel strip. According to the company, their new fabrication process sets completely new standards in automotive construction for safety-relevant components subject to heavy corrosion. Carmakers use phs-ultraform for longitudinal members, A and B pillars, side and front walls, sills, doors, and hatches. The technology contributes to reducing fuel consumption while enhancing occupant safety.

“Thanks to new materials such as phs-ultraform, we have managed to create car components with totally unique properties. And we have only just begun to develop this new product family,” says Wolfgang Eder, Chairman of the Management Board of voestalpine AG. “I expect us to double the turnover of 1.1 billion euros in the automotive sector over the next few years,” he continued. 30 million euros have invested up to 2008 in developing these materials, and a further 100 million euros will be added to this figure. The research budget for the current fiscal year amounts to 121 million euros; a total of 670 researchers work for the voestalpine Group throughout the world.

In the direct hot forming process (stamping method), steel blanks are heated to around 900°C and then shaped into their final geometry and hardened in a cooled form-hardening tool. “Voestalpine already has fully developed prototypes of car components that are produced using the direct process,” says Peter Schwab. The indirect process already in use involves one additional step: the steel blanks are first formed and cut to their final geometries using conventional cold forming technology and then heated to 900°C. By cooling the parts down to 70°C within a few seconds, they become extremely hard and their component geometry is finalized.

Despite their lightweight construction, the corrosion-resistant components display a range of advantages such as extreme strength (up to 1,800 MPa), cathodic corrosion protection and the possibility of processing blanks with various combinations of strength and thicknesses. “phs-ultraform therefore contributes significantly to the field of lightweight construction and is therefore extremely relevant with respect to applications in electric mobility,” says Eder.

Revealing what's beyond the 3D curvilinear architecture of reality
Diamonds created in minutes at room temperature
Sheets of carbon nanotubes come in a rainbow of colors
A plant to help the planet: A strong, tough, and scalable material from fast-growing bamboo