Lessons learned from the front lines of climate change

How can scientists studying different key foundational species under threat learn from one another to address declines in ecosystems? 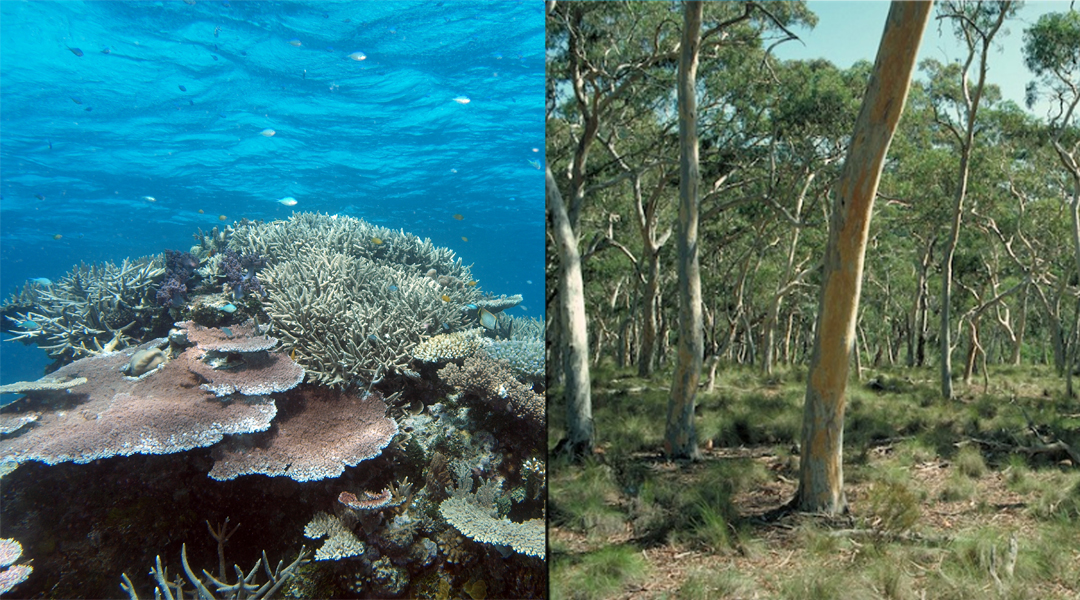 Effectively managing any native plant or animal species under climate change requires answers to several questions. Where does the species occur now? Where is it likely to occur in the future? Are human interventions needed to help to conserve the species? In a recent review in WIREs Climate Change, Dr. Trevor Booth of CSIRO Land and Water and Dr. Paul Muir from Queensland Museum compare progress in answering these questions using examples for species from two of Australia’s most iconic groups of ecosystems: eucalypt forests and reef corals.

At first glance, eucalypt trees and reef corals appear to have little in common, but closer study reveals surprising similarities in their biology and vulnerability to rapid climate change. Eucalypts and corals are both long-lived, sessile (non-motile) organisms that can reproduce not only asexually, but also sexually by broadcasting very large quantities of tiny offspring. Corals are the most plant-like of animals, deriving most of their energy from photosynthesis via microscopic algae that live symbiotically within their tissues. But perhaps most importantly, eucalypts and reef corals are the key, foundation species in their respective ecosystems, providing much of the framework that hundreds of thousands of other species rely upon. Losing these key foundation species would be catastrophic for many of our most diverse ecosystems.

Unfortunately, eucalyptus trees and reef corals are also similar in that they are on the front line of many climate change impacts. Eucalypts have suffered heavy losses from catastrophic bushfires (i.e. wildfires) linked to severe climate events. Corals have recently suffered huge mortalities from coral bleaching, which occurs when coral polyps lose their symbiotic algae as a result of unusually high seawater temperatures. In both cases, extreme conditions can kill individuals over extensive areas.

Researchers are now scrambling to understand these threats, likely future changes, and how we can manage these systems to prevent species extinctions. There are several promising areas for “cross-pollination” between the research efforts of eucalypt and reef scientists.

One example is predicting changes to species distributions from climate change impacts. Eucalypt researchers have made great advances in species distribution modelling or SDM, which determines the environmental factors such as mean annual temperature and rainfall of the driest quarter that shape a species distribution. From these analyses they can predict likely changes to species distribution under various climate change scenarios. These results are critical for managing ecosystems, for example, by identifying particularly vulnerable species and tailoring management responses to prevent species declines. Eucalypt researchers have spent many years working collaboratively to develop the large datasets of species distributions and environmental conditions that are required for SDM analyses. In contrast, SDM analyses have only rarely been used in coral research but could provide important information for managing the future of reefs. This would require a major collaborative effort to enhance existing datasets of coral species distribution and environmental conditions. Like their eucalypt colleagues, coral researchers could use online data-hubs such as the “Atlas of Living Australia” (https://www.ala.org.au) to facilitate this effort.

Addressing the declines in these ecosystems can seem quite daunting and is arguably one of the great challenges of our time, but much can be learnt from looking a little “outside the box” of one’s own research area.

High performance supercaps made from cotton waste and seawater
Land Versus Atmosphere Dry-Out: What Matters More for Droughts?
How power systems can be operated using only renewable power generation
Common plants and pollinators act as anchors for ecosystems