Artificial cactus spines, which can collect fog from the air, have been constructed by a research group from Beihang University. This water-harvesting method is of great interest in a world where water is becoming more scarce. 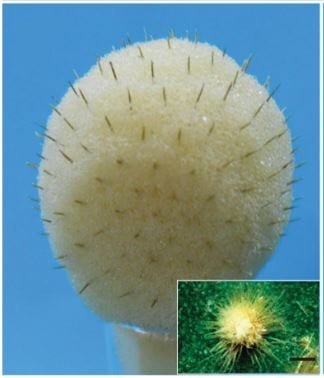 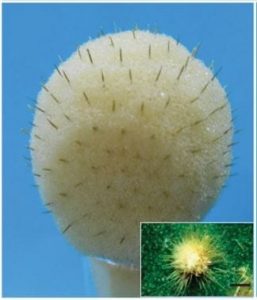 Artificial cactus spines, which can collect fog from the air, have been constructed by a research group from Beihang University. This water-harvesting method is of great interest in a world where water is becoming more scarce.

Water availability is a serious environmental concern, and is growing problem with increased world population, climate change, and pollution. Looking at how nature solves the problem – for example, examining how some plants get the water they need in arid regions – may help researchers find new ways of collecting water. In particular, the cactus has revealed interesting fog collecting and water transporting qualities.

Earlier studies have shown that these properties derive from the hierarchical groove structure on the surface of the cactus spine. These influence the Laplace pressure gradient and wettability gradient, which provide the driving forces to transport water from the tip to the base of the spine.

Whereas most previous research has focused on obtaining a surface with wettability gradient, new work from a group of scientists from Beihang University, Beijing, focuses on the fabrication of an artificial cactus spine and the reproduction of the hierarchical groove structure.

They obtained the groove structure through electrospinning of polyimid (PI) and polystyrene (PS) as a sacrificial template. Fog collection and water transportation tests were made using a saturated fog flow. Tiny water droplets arose at the tip of the artificial spine and merged with each other. Even when the tip pointed down, the growing drop directionally wandered from the tip to the base.

In comparison with two other artificial spines, a bare silver needle and smooth PI fibers, the spine with the groove structure showed better results. A cactus-like model with 180 spines pressed in a spherical sponge collected 1.3 mL in 15 minutes. 200 such cactus models would thus collect in the daily water requirements of an adult in a little under two and a half hours.

These findings, based on mimicking cactus spines, can help in the construction of more efficient water collectors. The ability to collect potential water (e.g. from fog) will be crucial in a world where water is getting ever more scarce.

Climate change and the city
Oldest air conditioning system in the world could help meet sustainable development goals
Colloid transport through soil: Moving through “gaps” with “waves”
Crawling out of the shadows: Arthropods as vertebrate predators