Professor Geoff Ozin asks: do we want to fight carbon dioxide, or embrace it? 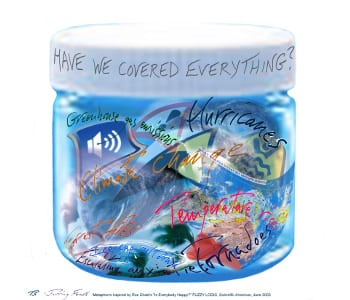 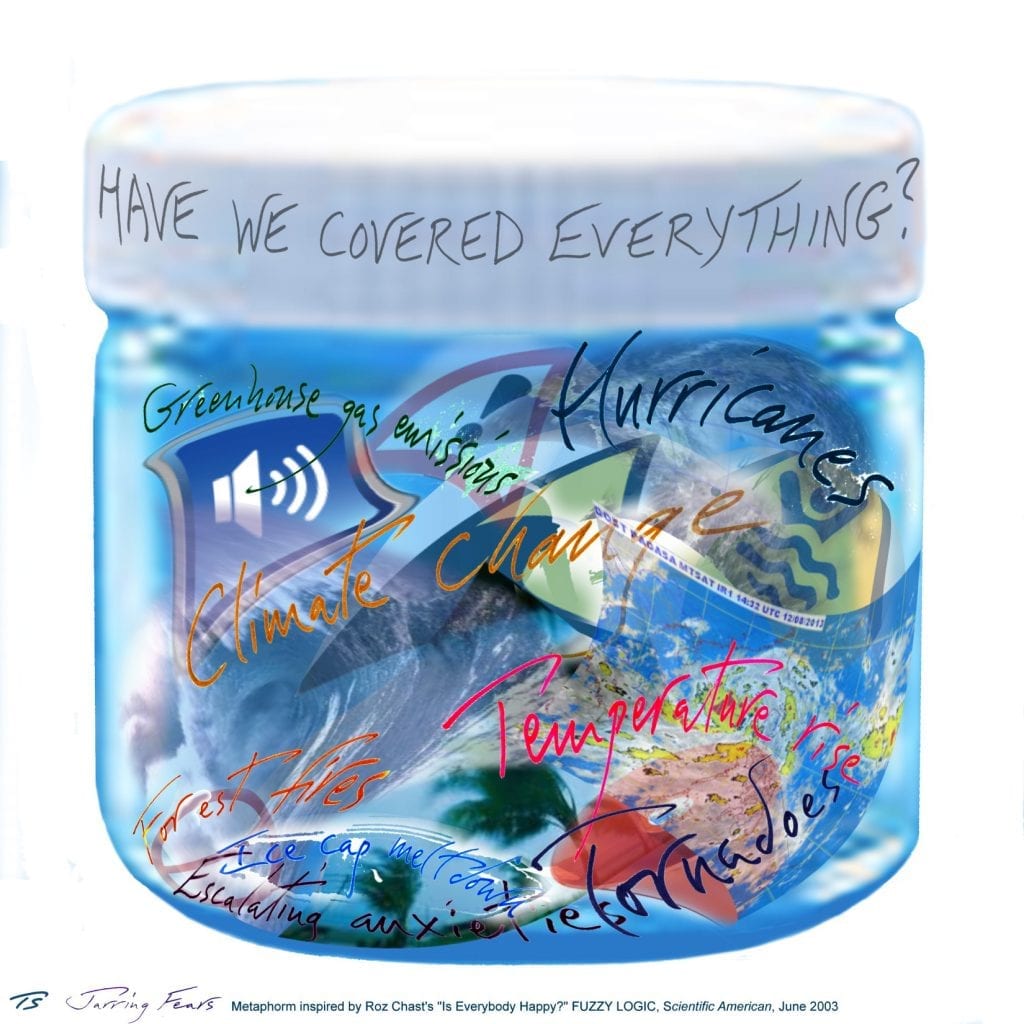 We are sensing increasingly escalating fear and angst amongst the public about the environmental uncertainties they must face in the next 10-20 years as a consequence of the relentless emission of carbon dioxide (CO2) from the combustion of legacy fossil fuels into our atmosphere, and the havoc the global temperature rise, caused by the associated greenhouse gas effect, is expected to wreak on the climate and their fragile existence.

In 2011 the International Panel on Climate Control (IPCC) announced a “carbon budget” for our atmosphere that was calculated to keep the rise in global temperatures to no greater than 2°C above pre-industrial levels; in 2011 they announced we have used up 67% of that budget!

Todd Siler’s transparent artwork “Jarring Fears” shows a glass jar of potentially deadly weather conditions ,which contrasts with Roz Chast’s insightful cartoon “Is Everybody Happy?”, (Fuzzy Logic, in Scientific American, 2003), which depicts a tin can full of some unknown, but, presumably, “safe,” consumable goods that’s smothered with popular health-conscious labels, designed to give us a peace of mind.

Crammed within this jar of fears are all the terrifying weather conditions that we dread will result from greenhouse gas climate change. The conditions range from more forceful and frequent hurricanes to record-breaking tornadoes; from rising temperatures to relentless forest fires, famine, drought and disease; from ice cap melting that causes loss of permafrost and the escape of methane, exacerbating sea level rise with ensuing floods of epic proportions. Picture this disquieting image looming over our heads like some proverbial black cloud. That’s the public’s perception of the state of the world that we would be wise to better understand.

The double-entendre title on the lid of this jar “Have we covered everything?” aims to prompt politicians and policy-makers to learn more about the complexity of this whole messy climate change challenge. Currently, they seem not to be “covering” the complexity – or simply fearing it – like so many world citizens experience who feel overwhelmed and frightened by the prospect of living on an ecologically bleak planet.

It humbles and saddens us all just imagining the extinction of the human race.

Is this really what we can look forward to understanding, by accepting the severity, pervasiveness and irreversibility of climate change, its impact on people and the ecosystem and adopting Plan A? This plan implies a global strategy whereby the finite supply of legacy fossil fuels will continue to be combusted and depleted with its associated emissions of CO2 spewed into our atmosphere. The cost of the risk against the benefits will be estimated and appropriate measures will be put in place to reduce the effects of the vulnerabilities and prepare for the consequences of CO2 driven climate change. In the absence of any aspirations on mitigation of CO2 emissions the future appears bleak.

Our most trusted experts assure us that our most well-established advanced technologies (wind, solar cells, biomass and geothermal) will save-the-day. But how exactly they’ll fulfill this promise remains a deep source of anxiety for many people who follow this developmental work closely. These experts assure us that hopefully very shortly we’ll have the ways and means to create a sustainable future with these renewable forms of energy operating synergistically. To date, these renewable forms of energy continue their remarkable growth and are becoming cost competitive with fossil fuels.

In 2012 global power generation from the four renewable forms of energy mentioned above provided nearly 0.5GW with almost $250B in investments, ahead of fossil fuels for the third year running. This begs the question; will the current targets for the proportion of renewable forms of energy versus the total energy demand be met? While 0.5GW sounds impressive, keep in mind the 20-30TW global demand for energy, which amounts to about 50 times the energy generated by renewable, most of which still comes from gas, oil and coal. This means current carbon dioxide emissions of around 40-50GTons per year continue unabated and will most likely continue for the foreseeable future.

Some would like us to believe natural gas will rescue us from the abyss as we are told there is plenty of it for at least 250 years. Is this “really” the best we can do for Plan B?

Burning natural gas adds 0.2kg CO2/kWh into our atmosphere compared to 0.4kg CO2/kWh from coal, 0.28kg CO2/kWh from oil, 0.05kg CO2/kWh from biomethane, and from wind and solar a mere 0.01kg CO2/kWh. Moreover, natural gas provides a stable energy supply, which integrates well with intermittent renewable forms of energy. Natural gas and biomethane can be readily stored, easily transported and is able to power our homes, industries and transportation.

While this all sounds quite promising it does not solve the problem of our burgeoning obsession with burning fossil fuels and the incessant emissions of greenhouse gas CO2 it churns out into our atmosphere.

In the future, excess electricity from wind and solar can be stored as synthetic natural gas obtained through electrolysis of H2O where the H2 so produced can be used to reduce CO2 to CH4 with known thermally powered heterogeneous catalytic industrial processes.

So the conversion of renewable electricity to natural gas does seem to integrate seamlessly into the existing gas infrastructure and might reduce some of the CO2 emissions in the process but globally CO2 from the combustion of fossil fuels will continue to be disgorged into our atmosphere.

The big question is whether natural gas and its synthetic replacement built into an integrated energy system will in the foreseeable future be enough to stop climate change in its tracks?  In this context, the recently published book, Sustainable Energy: Without the Hot Air by Cambridge University Professor of Engineering David MacKay quantitatively defines the enormity of the challenge of replacing fossil fuels by renewable forms of energy. Clearly, the current plan to burn the estimated 24 trillion tons of CO2 equivalents of fossil fuels that remain in the ground is neither desirable nor sustainable.

MacKay makes it clear in his reality study of a sustainable future that in order to address the crucial issues of climate change and energy security, new global scale renewable energy technologies beyond those mentioned above must be discovered and implemented to achieve CO2 emission targets and energy demands.

We believe a viable Plan B could be based on a materials technology that can simultaneously harness abundant solar energy – capturing and reducing gaseous carbon dioxide into fuels and chemical feed stocks, while addressing issues of energy security and climate change.

An appealing vision is an energy transition from one based on unsustainable fossil fuels to a sustainable solar fuels energy technology founded on capturing and utilizing CO2 – from both thin air and more concentrated localized sources. This strategy could be made compatible with existing CO2 emitting industries around the world.

Achieving this vision of a carbon-neutral-cycle technology necessitates developing compact, tandem, concentrated solar powered photochemical reactors for efficiently splitting gaseous water into H2 and then using the H2 to reduce gaseous CO2 to fuels and chemicals.

With major breakthroughs in conversion rates and efficiencies anticipated over the next five years, the time it should take to transform solar fuels laboratory-scale science to a global technology could be short enough to circumvent the predicted adverse consequences of greenhouse gas climate change. More to the point: this strategy will enable a timely energy transition from unsustainable fossil fuels to sustainable solar fuels.

Is this a credible Plan B? Does it deserve strong support from the fossil fuel producing and consuming industries around the world? Will countries with major concentrated sources of CO2 be among the main benefactors of Plan B?

We think Plan B could prove to be an important component of the renewable energy mix. And we’re certain it’s worth “covering” in-depth.

Tourism and climate change threaten Lake Baikal, a unique global treasure
Closing the plastic loop with a one-pot recycling process
The Knowns and Unknowns of the Herbicide MCPA
Investing in clean energy research: How likely are we to phase out fossil fuels?