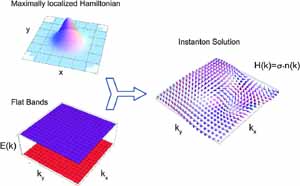 Materials with flat energy bands have interesting phases because of strong interaction effects. To find realistic Hamiltonians with flat bands, one wants to realize flat bands with local Hamiltonians. In this Letter, the authors show that the most localized flat-band Hamiltonians have eigenstate wavefunctions which are holomorphic functions in momentum space, and they correspond to instanton solutions in non-linear sigma models.

Topological insulators from the perspective of first-principles calculations [Review@RRL]

First-principles calculations play a crucial role in the field of topological insulators. This review briefly reports the widely-used techniques of first-principles calculations and the current progress in this field. Though many topological insulators have been dis-covered, it is still important to find more with desired properties, for example, a bigger band gap, multifunctional properties with topology. This review is expected to guide following works in this field.

Homogeneity analyses of thermoelectric (TE) semiconductors mainly require the determination of thermopower distribution, which provides meaningful information on the phase distribution and a benchmark on materials performance and repeatability of materials preparation. Insights into material structures and compositional distribution are not only necessary for investigations on high performance TE materials but are a fundamental pre-condition for the development of standard reference materials for thermopower. The high demand on their functional homogeneity disqualifies the use of high purity elements in most cases, as can be seen from the thermopower distribution of a germanium sample, since smallest impurities are frequently linked to a massive impact on thermopower due to its strong dependence on carrier concentration and structural variations.

The Stranski–Krastanow growth mode describes the transition from two-dimensional flat strained layer epitaxy to the formation of islands that can be technologically used as quantum dots. This has so far been utilised for In(Ga)As/GaAs and Ge/Si heteroepitaxy. Here, Walther et al. investigate multilayer samples of SiGe alloys grown with different germanium content and thicknesses by reduced pressure chemical vapour phase epitaxy and show that a similar transition can be found in the Si1–xGex-on-Si system at x ≈ 0.28. The images show Si1–xGex layers grown just above (left) or below (right) the onset of islanding. 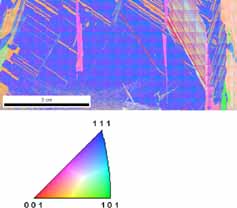 In this Feature Article, research work on solar cell silicon materials is reviewed, particularly the recent state-of-the-art research activities at the Norwegian University of Science and Technology (NTNU) on defects, crystallization and characterization. Control of nucleation and growth during the crystallization of the silicon ingots allows for control of the materials structure development. The authors show that a high initial cooling rate can give ingots with larger grains and preferred crystal orientation. Such control of nucleation conditions, although difficult to achieve in practice, appears to be a very important prerequisite for producing low defect density materials and, hence, high performance solar cells. Combination of advanced characterization tools allows for an in-depth study of materials properties and is important for tailoring the investigation from macro- to microscale.

The investigation on non-isothermal crystallization kinetics in Ge–Sb–Se glasses was performed by Wenhou Wei et al. using differential scanning calorimetry with five different heating rates of 7, 10, 14, 20, 30 K/min, respectively. Two different approaches, Kissinger’s equation and the Matusita model, were employed to analyze kinetic crystallization. It is shown that the appropriate glass for application in photonics should have a composition with a mean coordination number of 2.4–2.5 where the glass exhibits a reasonably high glass transition temperature and low crystallization activation energy, as well as good thermal stability and strong glass forming ability.

The first silicon laser, reported in 2000, was based on impurity transitions of the hydrogen-like phosphorus donor in monocrystalline silicon. Several lasers based on other group-V donors in silicon have been demonstrated since then. These lasers operate at low lattice temperatures under optical pumping by a mid-infrared laser and emit light at discrete wavelengths in the range from 50 μm to 230 μm (between 1.2 THz and 6.9 THz). Dipole-allowed optical transitions between particular excited states of group-V substitutional donors are utilized for donor-type terahertz (THz) silicon lasers. Another type of THz laser utilizes stimulated resonant Raman-type scattering of photons by a Raman-active intracenter electronic transition. The gain of the donor and Raman-type THz silicon lasers is of the order of 0.5 cm–1 to 10 cm–1, which is similar to the net gain realized in THz quantum cascade lasers and infrared Raman silicon lasers. 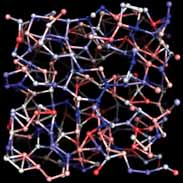 Cliffe and Goodwin suggest two metrics for assessing the quality of configurations of disordered materials: namely, local geometric invariance and degree of local symmetry. These enable screening for structural simplicity in a way that does not rely on formal group theoretical language (and hence long-range periodic order). The authors show that various SiO2 and a-Si configurations are ranked sensibly by this approach, which is found to be significantly more sensitive to unphysical features than pairwise correlations.