Underneath the freezing, desolate surface of Antarctica, phytoplankton are finding a niche 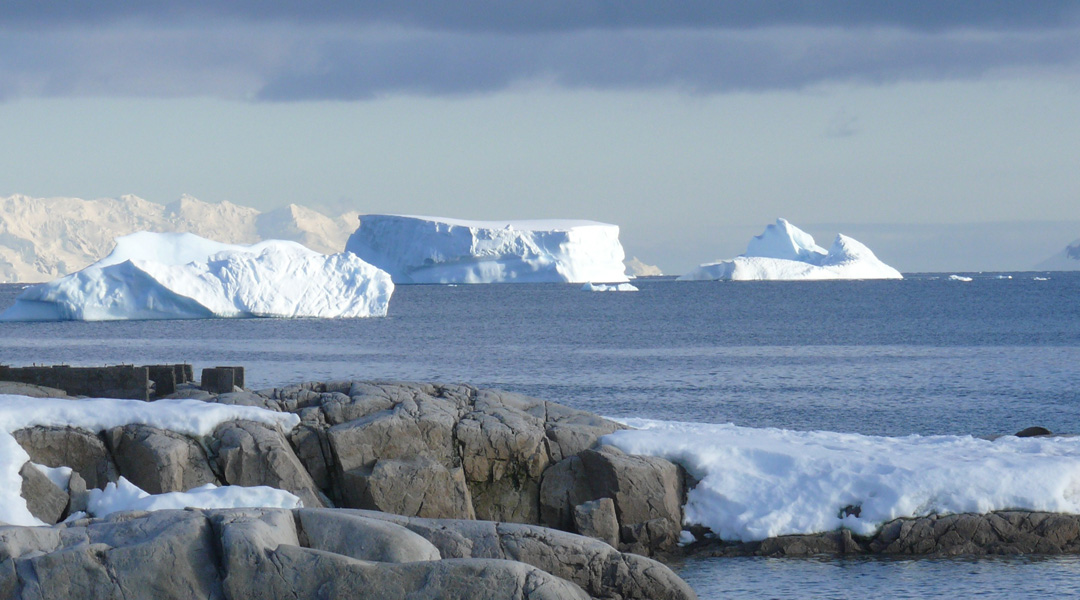 The Antarctic Ocean is covered in densely packed sea ice that is almost always covered in snow. As this snow cover reflects virtually all light that strikes it, scientists believed that, phytoplankton in these conditions would not be able to capture sunlight and turn it into chemical energy through photosynthesis.

Phytoplankton is a collection of  photosynthesizing microorganisms that are present in marine plankton. In other words, these organisms are able to synthesize organic matter from inorganic substances, using solar radiation as an energy source, like plants on the ground.

These microorganisms are the basis of the food chain of many aquatic ecosystems, and produce half of the total oxygen on Earth. Their growth depends on various chemical, physical, and biological factors, the most important of which is solar energy.

When conditions are favorable a phytoplankton bloom occurs.

In the Arctic, where the ice has already thinned due to global warming, episodes of phytoplankton blooming have already been detected in the past years. But a new study by a team of scientists from New Zealand led by Christopher Horvat of the University of Auckland suggests that blooming is also possible under Antarctic ice, where it was supposed that the sunlight could not arrive.

It was already known that phytoplankton blooms occurred in spring and summer in the Antarctic Ocean in areas not covered by perennial ice: with the seasonal events, phytoplankton respond to increased insolation by blooming as soon as the ice shrinks . Nevertheless, Horvat and his team began to wonder if a bloom was possible even below the thick Antarctic ice sheet.

To gather evidence, the researchers sent automated underwater robots called Argo Floats under the dense ice to sample the environment. Between 2014 and 2021, through a total of 2197 spring and summer dives, the researchers combined 79 sets of measurements.

The robots measured the amount of chlorophyll—a pigment essential to photosynthesis—in the water, the intensity of light under the ice, and the amount, concentration, and size of plankton found there.

Horvart and his team found an increase in phytoplankton with significant episodes of blooming under the sea ice, even before it began to retreat. Taking a look at all the under-ice measurements, as many as 88% of them showed clear phytoplankton growth. In 26% of the cases, the increase was so pronounced that the researchers interpreted it as an algal bloom under the ice.

These subglacial blooms are probably made possible because the ice cover of the Southern Ocean is dense but not completely closed everywhere. In fact, the ice is not homogeneous, but is formed by individual floating platforms that are not joined together. This sometimes causes small areas of open water to remain free: this allows light to pass through and thus photosynthesis to occur. Thus, while in the Arctic the phenomenon is due to the thinness of the ice, in the Antarctic it can be traced back to the non-homogeneity of the ice.

To support their data, the researchers combined it with NASA Earth observation data and climate models. In particular, they used the laser altimeter on NASA’s new ICESat-2 satellite to understand the compactness of the ice around Antarctica, and examined how much light reaches the upper ocean in comparison with eleven different global climate model assessments.

With these results, researchers were able to make estimates from which to begin new research: between three to five million square kilometers of the Antarctic Ocean still covered by ice could provide conditions for the development of phytoplankton blooms. This could have significant implications for marine ecosystems, particularly polar ones, which are being affected by climate change more dramatically than the rest of the planet.

Since phytoplankton is the base of the marine food chain, it follows that changes in the growth of these microorganisms, will impact the development of that ecosystem.

This current research has at least two kinds of implications: the first, which has already been found on several occasions, is that climate change directly and dramatically affects the life of sea creatures; the second is that the under-ice bloom phenomenon has probably been around for a long time and there is a whole new world of ecosystems all to be discovered. Doing so will require new surveys and sampling, which Horvart’s team is prepared to tackle in the near future.