A novel approach is presented for making polymer nanoparticles that can release dual osteogenic growth factors while adhering to Ti surfaces. 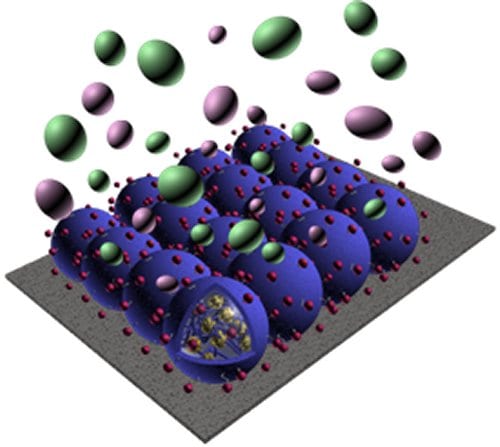 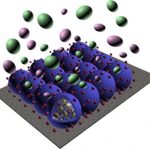 Based on advantages such as resistance to corrosion, excellent biocompatibility, and superb mechanical strength, titanium (Ti) and its alloys are known as one of most suitable metals for medical devices. By modifying Ti surfaces with various treatments such as mechanical groove, electrochemical polarization, and coating of several materials, the performance of medical devices can be further enhanced. A recent trend has focused on the immobilization of polymer nanoparticles on the surface of Ti due to advantages such as controlled releasing ability for loaded drugs and considerably low toxicity to organisms.

The most important issue is how to immobilize nanoparticles onto the Ti surface. Inspired by the sticky characteristics of catechol-containing mussel proteins, Sang Cheon Lee and co-workers (Kyung Hee University, Seoul, Republic of Korea) chose the catechol group as the key species for nanoparticle adhesion. This group has been widely used as an effective adhesive moiety that does not need any chemical reactions for the adhesion.

The research team have developed catechol-functionalized polymer nanoparticle that can spontaneously adhere to Ti surface. These nanoparticles have three domains: i) a hydrophobic biodegradable polymer core; ii) an anionic hyaluronic acid shell that can load positively charged dual osteogenic proteins; and iii) surface-exposed catechol groups. Several experiments supported that these nanoparticles can be used for various applications such as a good model of surface controlled releasing systems.