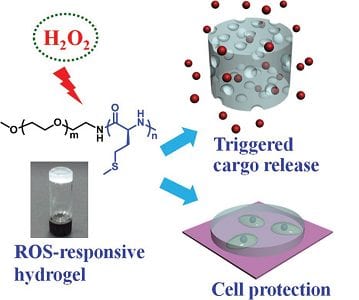 Reactive oxygen species (ROS) widely exist in living organisms and play important roles in cell signaling pathways, while increased production of ROS may disrupt cellular homeostasis, giving rise to oxidative stress and a series of diseases, such as atherosclerosis, neurodegeneration, arthritis, and diabetes. Therefore, materials capable of responding to ROS at physiological levels are of great signiﬁcance in diagnostic and therapeutic applications. Thermosensitive injectable hydrogels have been widely investigated in biomedical applications, including acting as sustained drug delivery depots and three dimensional (3D) cell culture scaffolds. The aqueous solutions of thermogelling polymers undergo spontaneous sol-to-gel transitions with the increase in temperature. 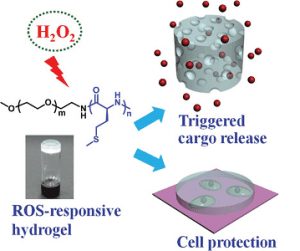 Recently Professor  Chen and his co-workers at the Changchun Institute of Applied Chemistry designed and synthesized a novel ROS-responsive thermogelling hydrogel based on methoxy poly(ethylene glycol)-poly(L-methionine) diblock copolymers. L-methionine is one of the critical antioxidants in vivo and acts as a sacrificial substrate to protect other essential residues such as cysteine from ROS damage. The sol-to-gel phase transition mechanism of the copolymer aqueous solutions is well studied. The formed hydrogels display peroxide hydrogen(H2O2)-responsive degradation process when incubated in the presence of H2O2. Rhodamine 6G is encapsulated into the hydrogel as a model drug and the release rate is accelerated by treating with H2O2. Moreover, the hydrogel is sensitive to pathological levels of ROS.

The unique response to cell behaviors of the hydrogel is revealed by the accelerated erosion after incubation with activated macrophages, which produce increased levels of ROS. L929 cells co-cultured with the hydrogel show markedly enhanced viability in presence of H2O2, suggesting an innate cytoprotective ability of the hydrogel under oxidative stress. Overall, the novel type of injectable, ROS-responsive hydrogel is expected to serve as promising platforms for sustained drug delivery and cell-based therapies in treatment of diseases with local oxidative stress.