A simplified Q&P processing was designed in order to study the role of martensite fraction. 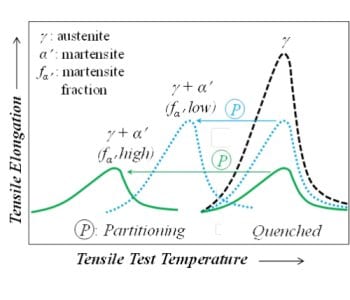 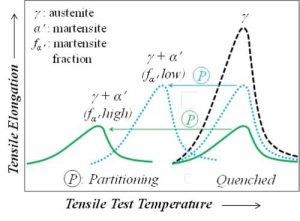 An adequate combination of strength and formability is a requirement in many steel applications. For car body applications, for instance, a high strength guarantees a high passenger safety and the associated weight reduction leads to an enhanced fuel economy and less environmental pollution. Formability, on the other hand, is a major requirement in the stamping step. For ferromagnetic steels (steels with a body-centered cubic crystal structure) conventionally used in automotive applications, increase in the strength achieved with martensitic microstructures sacrifices the formability. The weaker ferritic microstructures, on the other hand, offer a superior formability.

Enhanced combinations of strength and formability may be achieved by introducing paramagnetic austenite (with a face-centered cubic crystal structure) in the microstructure of ferromagnetic steels. This, however, requires substantial alloying with austenite-stabilizing elements such as nickel and manganese which is not economically viable. Austenite stabilization can also be done by raising the carbon content. Nevertheless, steels with high nominal carbon contents suffer from a poor weldability. This problem may be solved by keeping the nominal carbon content low, creating a martensitic-austenitic microstructure, and making the supersaturated carbon in the martensite partition into the austenite. Obtaining a martensitic-austenitic microstructure with a carbon-enriched austenite is the basis of a rather recent thermal treatment concept known as quenching and partitioning (Q&P).

In order to study the role of martensite fraction in the Q&P processing, researchers from TU Bergakademie Freiberg have designed a simplified Q&P processing. Experimental alloys were Fe-Cr-C, Fe-Cr-C-Co, and Fe-Cr-C-N stainless steels. The simplified Q&P processing consisted of quenching to room temperature to produce various martensite fractions followed by a partitioning step at 450 °C to enrich the carbon in the austenite. Tensile tests were subsequently performed at temperatures between room temperature and 200 °C.