New work summarizes progress on the structural characteristics, synthetic methods and thermoelectric properties of a new class of thermoelectric materials. 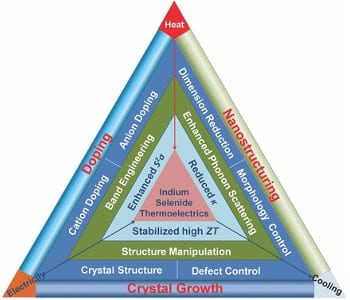 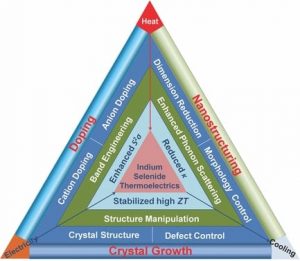 A major impetus in the development of modern civilization has involved various methods of energy generation, conversion and use. Because electricity will remain the most convenient form of energy in the foreseeable future, sustainable and eco-friendly methods with which to generate electricity are of extreme importance. On the other hand, heat has been always an abundant but low quality source of energy, as more than half of all the energy that we generate is lost as waste heat. The demand for alternative energy technologies to reduce our reliance on fossil fuels and the resulting greenhouse emissions hence leads to important regimes of research, including that of direct thermal-electrical energy conversion via thermoelectricity.

Indium selenides, especially In4Se3 materials, have recently been identified as promising high efficiency thermoelectric due to their extraordinary and tunable electrical and thermal properties. High zT values of ~1.5 at 700K have been reported for both In4Se3 single crystals and polycrystalline samples. The researchers first examined the structural characteristics and synthetic method of indium selenides. Indium selenides contain various complex compounds with different stoichiometric ratios, such as In4Se3, In2Se3, InSe, In6Se7 and In3Se4. With the same stoichiometric ratio, different phases and crystal structures may coexist, such as a, b and g–In2Se3, and hexagonal and rhombohedral InSe. The phase transformation and crystal structure of these compounds have been studied through XRD, TEM and DTA. Their fabrication methods generally include melting, single crystal growth, and physical and chemical vapor deposition. As for the nanostructures of indium selenides, because nanostructuring may result in enhanced phonon scattering and hence reduced lattice thermal conductivity, vapor-phase and solution-phase synthesis have been applied. The group provide comprehensive summaries of indium selenides in this review article, including crystal structures, lattice parameters, phase transformations, synthetic methods, nanoscale morphologies and thermoelectric properties of almost all of these indium selenides.

The thermoelectric properties of indium selenides are strongly dependent on their intrinsic structural characteristics, including compositions, phases, crystal structures, and structural imperfections. Among all reported indium selenides, In4Se3 shows a relatively low bandgap. A noticeable feature of In4Se3-x is its very low thermal conductivity due to the Peierls lattice distortion and pronounced phonon scattering at the Se-deficent sites, which is the main cause of the high zT of ~1.5 in this system. However, the carrier concentration of this compound is much lower than optimum carrier concentration, doping has been employed to maximize its electrical power factor and hence zT. It is also noteworthy that the thermoelectric properties of In4Se3 are anisotropic due to layered crystal structure. Many investigations have been carried out to explore the polycrystalline In4Se3, in order to obtain isotropic thermoelectric properties and to reduce fabrication cost. Nanostrucruing, Se deficiency self-doping and Pb/Sn co-doping have been employed to enhance thermoelectric properties. However, some research results on zT values are significantly different and even contradictory. It still remains as an open question that whether and how their thermoelectric properties can be further enhanced.

Overall, this review presents a comprehensive summary of the current understanding of the structural characteristics (crystal structures, phase transformations and structural vacancies), controllable synthesis (bulk materials, thin films and nanostructures) and thermoelectric properties of indium selenides. Current challenges and opportunities are proposed. Although high zT values for In4Se3 need to be seriously re-checked taking the measurement and phase stability into consideration, the related research indeed opens up an opportunity for understanding thermal and electrical transport and searching for possible approaches for thermoelectric performance enhancement.