In Flight and Fight – The Turbulence Carbon Dioxide Causes

We have recently learned that the high levels of carbon dioxide we breathe for extended periods inside planes can cause neurological problems. 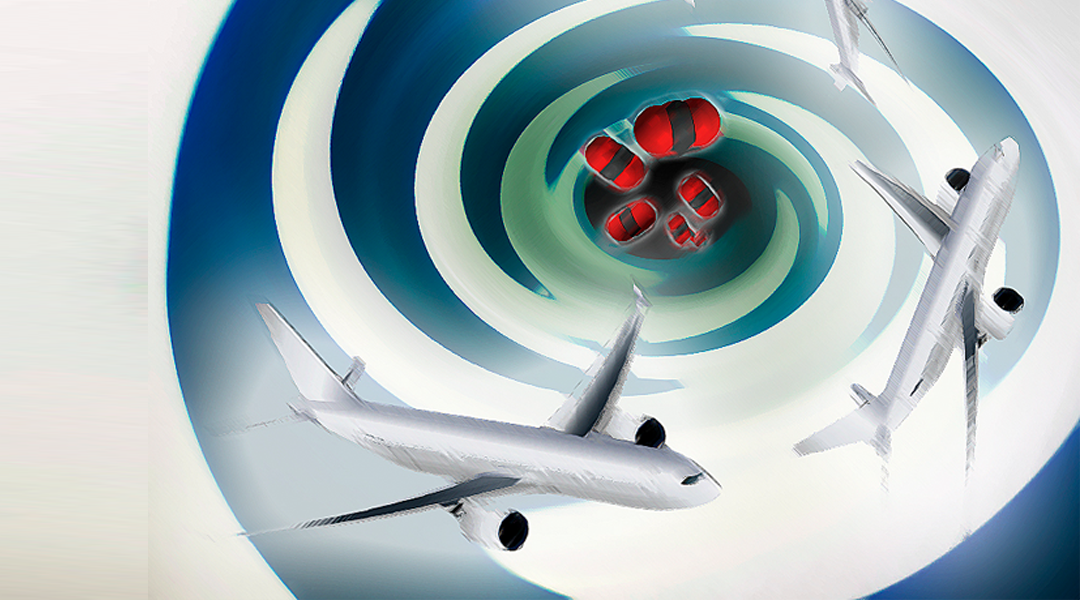 As if we don’t have enough to worry about fighting carbon-dioxide-induced climate change during our time spent on earth, now we also have to be concerned about the time we spend flying around in aircraft. 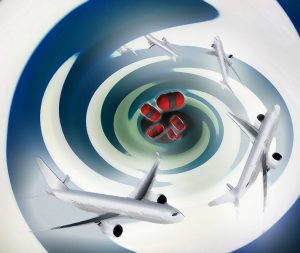 In this context, we have recently learned that the high levels of carbon dioxide we breathe for extended periods inside planes can cause neurological problems.

Now we discover the increasing levels of anthropogenic carbon dioxide outside of the plane can intensify the jet stream in the tropospheric aircraft flight paths and cause severe clear air turbulence. This turbulent movement of air masses is pilot invisible and is to be contrasted with that caused by visual signs such as clouds.  Clear air turbulence can endanger the safety of the crew and passengers as well as put the plane itself in jeopardy (P. D. Williams, Adv. Atmos. Sci., 2017, 34, 576).

We certainly hear a lot about the effects of climate change on the ground but we don’t hear too much about how the changing climate is affecting the atmosphere in which aviation flies in the jet stream at altitudes of 30 000 to 40 000 feet.

It is however common knowledge that aviation makes a significant contribution to climate change through the CO2 emissions in the atmosphere from the combustion of jet fuel. Globally, the aviation industry generates around 2% of anthropogenic CO2 emissions and about 13% of that from all transport sources. But we don’t realize the impact that climate change is having on aviation itself.

In this context, the effects of climate change on the ground for airlines involve disruption of airport operations and the vulnerability of coastal airports to rising sea levels and storm surges. The effect of global warming on runways puts a limit on the total weight requirement carried by planes, increases the frequency of lightning, boosts the chances of disruptions and delays with flights, and the changing wind patterns at cruising altitude complicate flight routes and increase travel times. 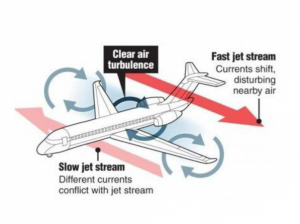 More recently it has been realized that heightened levels of CO2 are increasing the intensity and frequency of clear air turbulence associated with more powerful jet stream related wind shears. Clear air turbulence occurs in the space between a fast and slow jet stream. It is invisible to radar, is essentially unpredictable and strikes fear in one’s heart for an unforgettable few seconds. Anyone or anything in the aircraft is insecure under conditions of severe turbulence.

The origin of this intensification of clear air turbulence by CO2, which occurs at altitudes where aircraft fly, stems from an increase in the temperature and density gradients between the equator and the poles induced by the combined effects of a warming troposphere and a cooling stratosphere, as discussed earlier.

Based on modelling studies, climate scientists believe that there will be an increase of 40–170% in clear air turbulence incidences on winter time transatlantic flight routes if CO2 levels in the troposphere are allowed to double in size compared to the time before the Industrial Revolution. Increased levels of this kind of turbulence will exacerbate the fear of flying experienced by many people. It’s incredible to learn that around 63 000 encounters with moderate to greater turbulence and 5 000 encounters with severe or greater turbulence occur globally every year. These incidences cause a large number of injuries to flight crew and passengers. It is expected that this can only get worse as the levels of CO2 in the atmosphere increase with time. 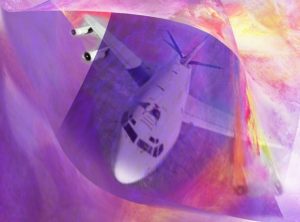 Flying Through Carbon Dioxide Turbulence – physically and politically speaking, we’re enveloped by the turbulence carbon dioxide is creating that challenges science, technology, and society to fight this turbulence and wisely deal with it constructively rather than dread its consequences. Courtesy of Todd Siler and Geoffrey Ozin, www.artnanoinnovations.com.

As well as injuring passengers and crew, clear air turbulence is also responsible for many different kinds of structural damage to the aircraft themselves. Just for US airline carriers, it has been estimated that the total economic cost of injuries, aircraft damage, delays to flights, time out of service because of repairs and pre- and post-accident investigations is in the range of $100–$200M annually. All of these problems are expected to be exacerbated in the future because the aviation industry is anticipated to grow at a rate of 5% annually, meaning it will double in about 14 years.

It’s also possible that with the anticipated intensification of clear air turbulence, the current health and safety certifications of aircraft may not be sufficient to meet safe flying standards. In order to avoid encounters with moderate to severe turbulence pilots are most likely to try to evade them by adopting more convoluted flight paths. These inconvenient random motions will lengthen flight times as well as boost fuel consumption and associated CO2 emissions. All of the effects would lead to an increase in costs for the aviation industry.

Apparently, in addition to being concerned about the effects increasing greenhouse gas emissions have on our lives, we now have to worry about flying with the news higher levels of CO2 in Earth’s atmosphere will increase our encounters with increasingly severe clear air turbulence. This will surely make our flights even more uncomfortable and our fear of flying even worse than it is already.

It’s worth mentioning that this situation could improve in the next 10–20 years as the dream of electrically propelled aircraft transitions from fantasy to reality with improvements in battery technology and prototype design electric planes of early adopters beginning to take to the sky.

If that’s not enough, the vision of the ‘flying taxi’ has recently been reduced to practice by a German start-up company. They are one of a number of companies vying in the competition for an electric vehicle that can function as a vertical takeoff and landing craft. In the near future, we might be seeing airborne taxis for crowded city streets capable of ferrying passengers over busy cities to their destinations much faster than anything else. The top speed of the craft is more than 150 mph, with a rechargeable battery that lasts for 1 hour.

On a final note, the advent of flying cars or mini planes would only make crowded skies even more crowded.  There is already a growing problem of drones flying at unauthorized heights causing dangers to normal aircraft.  There would need to be a means of controlling these flying cars/mini planes.