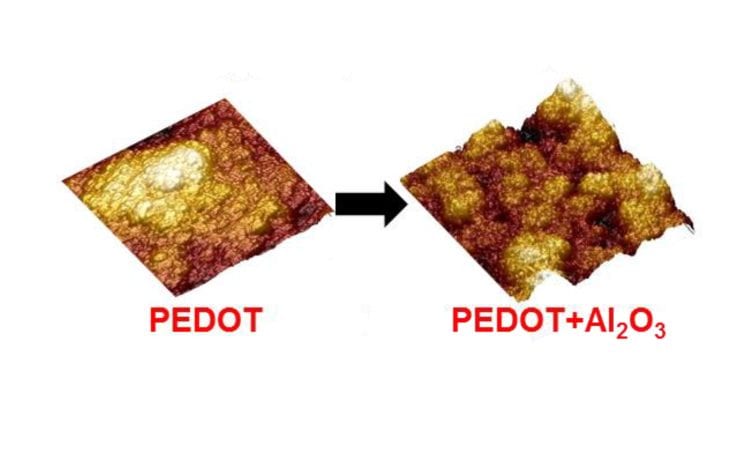 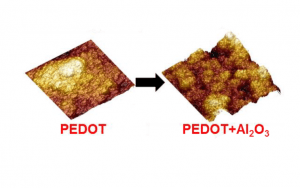 However, because nanoparticles tend to coagulate, it is challenging to synthesize well-dispersed composites in such suspensions. Carlos Alemán and co-workers have demonstrated a multi-step process for preparing stable PEDOT/Al2O3 composites with high specific capacitance using a simple in situ anodic polymerization technique while varying the pH, published in the Journal of Polymer Science: Polymer Physics.

The most commonly used intrinsic conducting polymers for the fabrication of energy storage devices are polyaniline, polypyrrole, poly(3,4-ethylenedioxythiophene) (PEDOT) as well as their derivatives. Among them, PEDOT has been widely used due to its outstanding capacitive performance, fast doping-undoping process, stable charge-discharge response, high conductivity, good environmental stability in doped state, simplified preparation and low cost. In addition, hybrid nanocomposites have been proven to exhibit enhanced capacitive and electrochemical properties, as is the case when PEDOT is combined with other materials, including clays, graphene, carbon nanotubes, and inorganic oxides.

The tunable surface of aluminum oxide at various pH makes this ceramic material attractive for the fabrication of PEDOT-based electrodes with enhanced electrochemical properties. However, in spite of its enormous potential for energy storage applications, the electrochemical synthesis of PEDOT/Al2O3 in acidic or basic conditions has not been explored yet and the properties of the resulting composites are unknown.

Dr. Alemán and colleagues synthesized PEDOT/Al2O3 composites in an aqueous medium, at different monomer:alumina ratios in the reaction medium, with a pH range from 2.3 to 10.8. The influence of the alumina content, the pH of the generation medium and the presence of the synergistic effects associated with multi-layered systems on the electrochemical properties of the composites were investigated. In addition, the influence of such parameters on the surface morphology, the surface topography and the wettability were examined. The PEDOT/Al2O3 nanocomposites prepared in this work may improve the performance of electrochemical energy storage devices by introducing a small amount of non-toxic inorganic material.