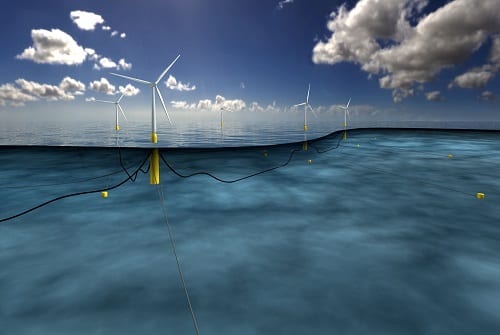 The Norwegian oil and gas company Statoil is planning to build the first floating wind farm off the Scottish coast. The park will be located near Buchan Deep, approx. 25-30 km off the coast of Peterhead in Aberdeenshire.

The 30 MW pilot project will consist of five, 6 MW floating turbines operating in waters exceeding 100 m of depth. Statoil’s aim is to demonstrate cost efficient and low risk solutions for commercial scale parks. The technology that will be used in the pilot project has been successully tested in a demonstration project off the coast of Norway. 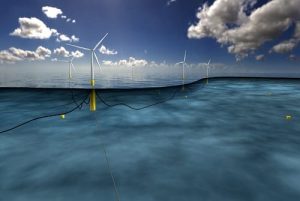 Hywind consists of a wind turbine placed on top of a ballasted steel cylinder. Source: Statoil

The Hywind concept combines known technologies in a new setting and opens up the possibility for capturing wind energy in deep-water environments. Hywind has been designed as a slender cylinder structure. The company told, it was chosen as the most feasible and economical concept for a floating wind turbine.

It is turbine independent and, in principle, any offshore wind turbine generator can be used as long as the combined weight of the nacelle and rotor is within the requirements for marine stability.

Statoil’s proprietary Hywind-specific pitch motion controller is integrated with the turbine’s control system and mitigates excessive motions of the structure. This also eliminates the loss of energy due to aerodynamic or hydrodynamic movements and maximizes the power output from the turbine. The structure is ballast-stabilized and anchored to the seabed. The mooring system consists of three mooring lines attached to anchors suited to the seabed conditions on site.

Statoil expects to show the feasibility of multiple floating wind turbines in a region that has optimal wind conditions, a strong supply chain within oil and gas sector. Furthermore the pilot park region has supportive public policies such as enhanced support for floating offshore wind pilot parks under the Renewables Obligation (Scotland).