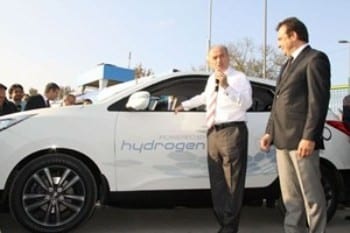 Hydrogenics Corporation, a leading developer and manufacturer of hydrogen generation and fuel cell products, today announced that a Hydrogenics electrolysis-based hydrogen fueling station has been officially opened in Turkey in the presence of Kadir Tobass, Mayor of Istanbul, as well as journalists and members of the public.

The fueling station is located at Golden Horn, the historic inlet of the Bosphorus straight, and can fuel up to 65 kilograms per day of hydrogen at 350 bar. The station is for both land and sea transportation applications where Hydrogenics’ 8kW fuel cells can be used.

The station was financed by the International Centre for Hydrogen Energy Technologies (ICHET), a project of the United Nations Industrial Development Organization (UNIDO), founded in Istanbul in 2004 and supported by the Turkish Ministry of Energy and Natural Resources. ICHET seeks to initiate projects in the developing world that establish or enhance hydrogen production from indigenous – and preferably renewable – energy resources so that hydrogen can take a far more important role in the satisfaction of local energy needs. Additional information about ICHET and UNIDO can be found at www.unido-ichet.org.