The intermittent nature of renewable wind and solar energy arising from fluctuations in weather conditions requires the development of efficient and cost-effective large-scale energy-storage systems to create a steady supply of electrical energy for most applications. 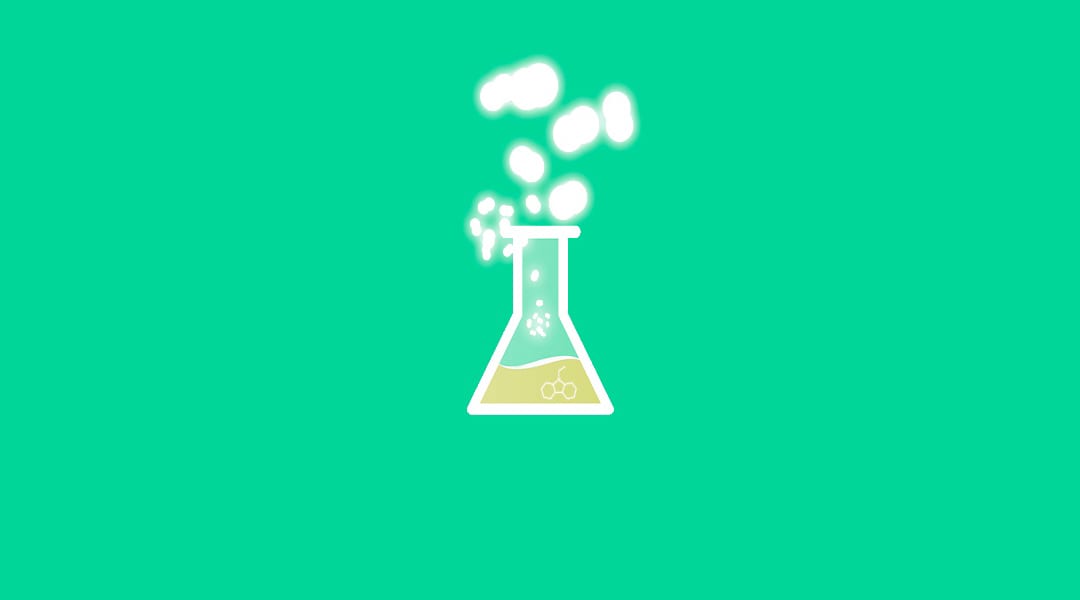 Towards a Hydrogen-Free Hydrogen Economy

The intermittent nature of renewable wind and solar energy arising from fluctuations in weather conditions requires the development of efficient and cost-effective large-scale energy-storage systems to create a steady supply of electrical energy for most applications.

Currently, pumped hydroelectric systems provide the predominant storage form, with a minor role played by other technologies such as battery grids, flywheels and compressed air. There is therefore a dire need for alternative approaches for storage of renewable energy at scale, and convenient ways for its transportation to its place of use.

Chemical storage of energy is one such approach and hydrogen, with the largest known gravimetric energy storage density (33 kWh kg–1) would be the ideal choice except for the inconvenient fact that its current mode of physical containment requires either extremely low temperatures (–253°C) or excessively high pressures (200–700 bar). 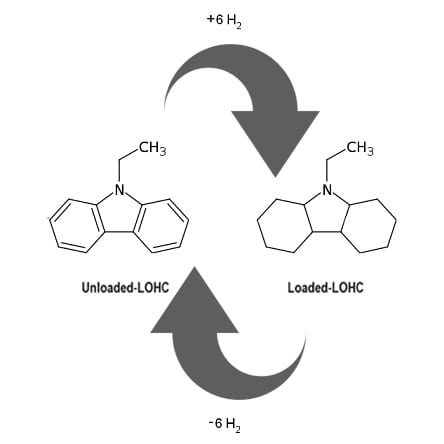 Because of these challenges, there is growing awareness of an alternative method to store hydrogen, rather than physically by compression and cooling means, instead chemically, in the form of the energy content of carbon–hydrogen bonds in hydrogen-rich organic molecules.

The idea is that catalyzed dehydrogenation of a liquid organic hydrogen carrier, given the acronym LOHC, provides a source of hydrogen. Subsequent re-hydrogenation of the unsaturated organic returns it to its hydrogenated state.

This cyclic dehydrogenation/re-hydrogenation process is illustrated in Figure 1, where one observes that hydrogen and energy-rich organic molecules are produced by catalytic hydrogenation of the unsaturated organic molecule at a location that has access to a source of renewable hydrogen. This could be from the electrolysis of water using solar- or wind-generated electricity.

Representative heterogeneous catalysts active for these cyclic dehydrogenation/re-hydrogenation reactions include the platinum group metals and their metals carbides. Operating conditions are usually in the range of 150–250°C at one atmosphere. Typical organic hydrocarbon carriers to enable this cyclic process are hydrogen-rich aromatic and cyclic aliphatic molecules. Their properties have to be carefully adjusted not only to maximize the efficiency of the dehydrogenation/re-hydrogenation cyclic loops but also to optimise storage density, liquid range, vapor pressure, thermal and chemical stability, toxicity, and availability at scale and cost. 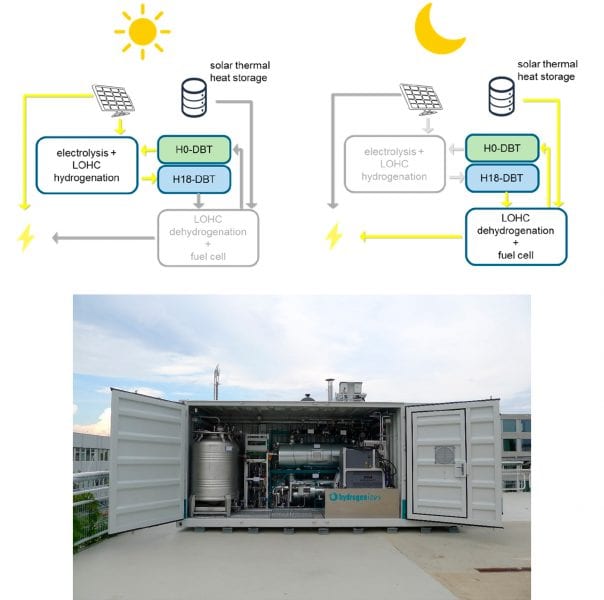 In practice there are five main components in a liquid organic hydrogen carrier system for energy storage: i) water electrolysis, ii) re-hydrogenation, iii) storage container, iv) dehydrogenation and a v) fuel cell. Ideally, a single reactor and catalyst or combination of catalysts that can perform the dehydrogenation and re-hydrogenation reactions at similar temperatures and with acceptable activities would offer numerous advantages over two separate reactors and catalysts in terms of the complexity of the equipment, management and operating systems. The discovery of catalysts that can facilitate this task are eagerly awaited. It is surmised that a photothermal catalyst might enable the dehydrogenation-rehydrogenation reactions in one reactor, whereby a properly tailored nanostructured catalyst could drive half the cycle with light and the other half with heat from the sun.

Figure 2 shows a scheme of a liquid organic hydrogen carrier system that is suitable as an off-grid, power supply. When solar energy is available, solar cells produce electricity to run the hydrogenation unit and charge the solar thermal heat storage system. When solar power is not available the dehydrogenation unit is powered by the heat stored in solar thermal energy unit.

This concept has been applied to practice very recently by Hydrogenious Technologies GmbH, Erlangen and installed at Fraunhofer IAO, Stuttgart. The unit is transported to Stuttgart from Erlangen by road and runs on the high hydrogen content liquid organic hydrogen carrier molecule perhydrodibenzyltoluene, coined H18-DBT.

The organic carrier is prepared in Erlangen using solar power, a water electrolyzer from Siemens, and a hydrogenation unit from Hydrogenious. The demonstration unit delivers 30 kW power. Currently it is integrated into a micro smart grid where it charges electric vehicles at night at Fraunhofer IAO, Stuttgart. 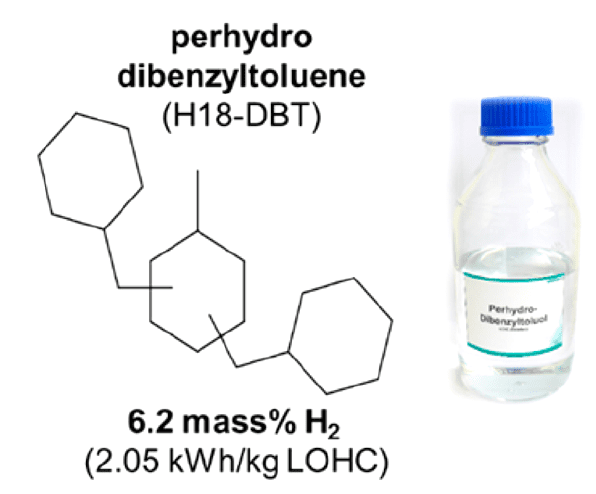 It is clear from the above status report on liquid organic hydrogen carriers that they offer the potential to provide a convenient means of storing hydrogen in an organic molecule at technologically relevant TWh scales and for extended time periods. This means of hydrogen storage can help solve the challenges of intermittent renewable electricity supplies by forming a bridge between low sun and low wind harvesting periods. Furthermore, the liquid organic hydrogen carriers can be readily transported by pipelines, trucks and ships over long distances and easily integrated into existing infrastructure. These exciting developments speak well as enablers for the transition from a fossil fuel to a future hydrogen economy.