How to Prevent Dewetting of Liquid Thin Films?

A network of polymer crystalline fibrils generated in situ during spin-coating suppresses effectively dewetting of the diluted polymer solution. 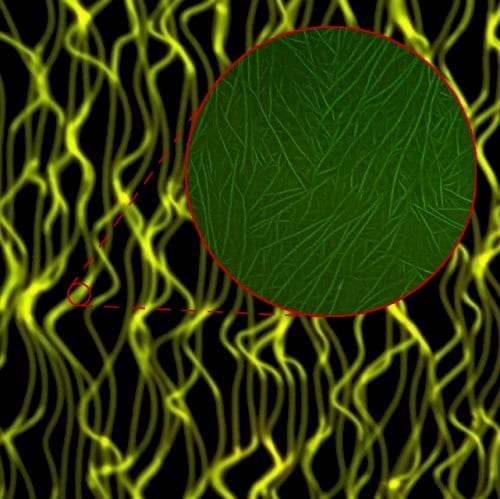 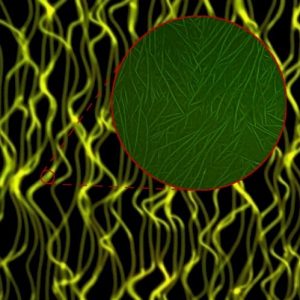 A liquid thin film that is not compatible with the solid surface to be placed on is destined to break up into small droplets or to generate multiple holes. This dewetting phenomenon has been a research theme for over hundred years and the detailed mathematical description is still in controversy. Researchers have tried to adjust the surface energy of the solid to be similar with that of the liquid, so using a hydrophobic substrate for hydrophobic liquid or a hydrophilic substrate for hydrophilic liquid. Unfortunately, those efforts have not been successful and it is consented that the thermodynamic instability of a liquid thin film is not avoidable.

Distinguished from the previous approaches controlling the surface energy of a solid substrate, Unyong Jeong and co-workers (Yonsei University, Seoul, Korea) now developed a novel method to prevent the flow of liquid thin films. They simply mix a small amount of high molecular weight crystalline polymer (a few weight percent) into a liquid. The polymer crystal grows into nanofibrils to form a physical network in the liquid during the spin-coating process. The physical network restricts the flow of liquid, therefore the dewetting of the liquid thin film does not take place or is at least delayed, depending on the weight percent of the polymer. The fast growth of crystal fibrils and the resulting prevention of liquid instability is surprising. If the dewetting can be prevented, diverse applications that were not accessible previously can be readily achieved.

This method will be very useful to a number of surface patterning techniques, including soft lithography. As an example the authors utilize this process to fabricate residual layer-free hydrogel and metal oxide (In2O3, ZnO) micropatterns.