New research adds to knowledge of potential toxicity of nanomaterials. 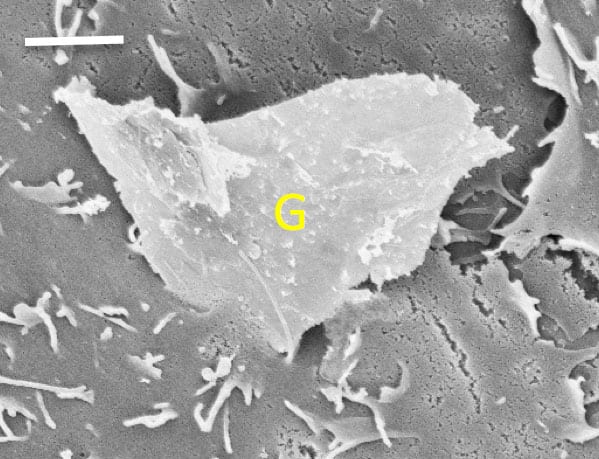 Researchers from Brown University have shown how tiny graphene microsheets — ultra-thin materials with a number of commercial applications — could be big trouble for human cells.

The research shows that sharp corners and jagged protrusions along the edges of graphene sheets can easily pierce cell membranes. After the membrane is pierced, an entire graphene sheet can be pulled inside the cell where it may disrupt normal function. The new insight may be helpful in finding ways to minimize the potential toxicity of graphene, said Agnes Kane, chair of the Department of Pathology and Laboratory Medicine at Brown and one of the study’s authors.

“At a fundamental level, we want understand the features of these materials that are responsible for how they interact with cells,” Kane said. “If there’s some feature that is responsible for its toxicity, then maybe the engineers can engineer it out.”

The findings were published online July 9 in Proceedings of the National Academy of Sciences.

Discovered about a decade ago, graphene is a sheet of carbon just one atom thick. It is incredibly strong despite being so thin and has remarkable electronic, mechanical, and photonic properties. Commercial applications in small electronic devices, solar cells, batteries and even medical devices are just around the corner. But not much is known about what effect these materials might have if they get inside the body either during the manufacturing process or during a product’s lifecycle.

“These materials can be inhaled unintentionally, or they may be intentionally injected or implanted as components of new biomedical technologies,” said Robert Hurt, professor of engineering and one of the study’s authors. “So we want to understand how they interact with cells once inside the body.”

These latest findings come from an ongoing collaboration between biologists, engineers, and material scientists at Brown aimed at understanding the toxic potential of a wide variety of nanomaterials. Their work on graphene started with some seemingly contradictory findings.

Preliminary research by Kane’s biology group had shown that graphene sheets can indeed enter cells, but it wasn’t clear how they got there. Huajian Gao, professor of engineering, tried to explain those results using powerful computer simulations, but he ran into a problem. His models, which simulate interactions between graphene and cell membranes at the molecular level, suggested that it would be quite rare for a microsheet to pierce a cell. The energy barrier required for a sheet to cut the membrane was simply too high, even when the sheet hit edge first.

The problem turned out to be that those initial simulations assumed a perfectly square piece of graphene. In reality, graphene sheets are rarely so pristine. When graphene is exfoliated, or peeled away from thicker chunks of graphite, the sheets come off in oddly shaped flakes with jagged protrusions called asperities. When Gao reran his simulations with asperities included, the sheets were able to pierce the membrane much more easily.

Annette von dem Bussche, assistant professor of pathology and laboratory medicine, was able to verify the model experimentally. She placed human lung, skin and immune cells in Petri dishes along with graphene microsheets. Electron microscope images confirmed that graphene entered the cells starting at rough edges and corners. The experiments showed that even fairly large graphene sheets of up to 10 micrometers could be completely internalized by a cell.

“The engineers and the material scientists can analyze and describe these materials in great detail,” Kane said. “That allows us to better interpret the biological impacts of these materials. It’s really a wonderful collaboration.”

From here, the researchers will look in more detail into what happens once a graphene sheet gets inside the cell. But Kane says this initial study provides an important start in understanding the potential for graphene toxicity.

“This is about the safe design of nanomaterials,” she said. “They’re man-made materials, so we should be able to be clever and make them safer.”