Graeme Moad on the status of the RAFT dilemma

Developments in understanding the mechanism and kinetics of dithiobenzoate-mediated RAFT polymerization from 2006 to 2013 are critically assessed. 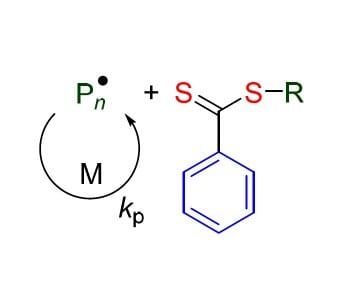 Dithiobenzoates are among the most popular agents for reversible addition-fragmentation chain transfer (RAFT) polymerization. This is attributed to the better control over molecular weight and end-group fidelity found in RAFT polymerization of methacrylates and methacrylamides. However, in polymerization of styrenes, acrylates, and acrylamides, their use has diminished, mainly in favor of trithiocarbonates, because of issues with retardation, as well as hydrolytic and thermal instability.

In his recent Trend Article, Graeme Moad (CSIRO Materials Science and Engineering) critically assesses developments in understanding the mechanism and kinetics of dithiobenzoate-mediated RAFT polymerization from 2006 to 2013, with specific reference to the choice of reagents, polymerization conditions, side reactions, and factors leading to retardation.

As is shown, the situation remains unresolved to the extent that papers in support of the two hypotheses continue to appear on a regular basis.