Carbon dioxide has been labelled as the main culprit driving global warming, but is now improving its reputation as an environmentally friendly refrigerant. 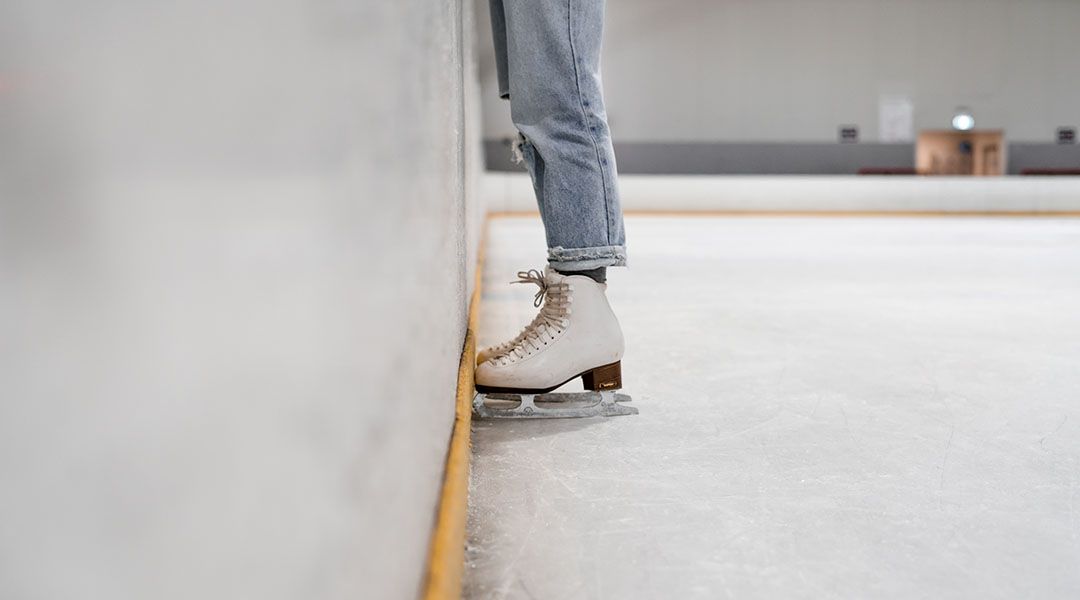 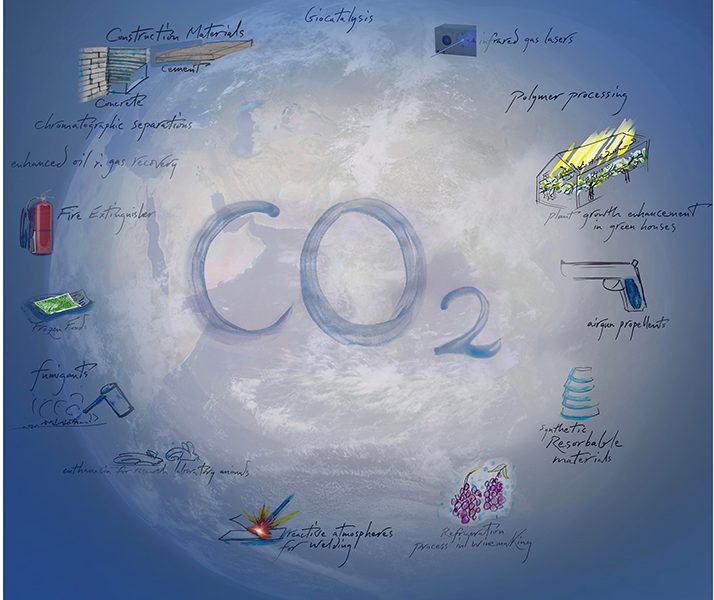 There are a myriad of applications in which CO2 is commonly found: soft drink carbonation, an ingredient in frozen foods, plant growth enhancement in green houses, refrigeration during winemaking and other processes, providing reactive atmospheres for welding, propellant for airguns, fire extinguishers (particularly for electrical and oil fires), removal of caffeine from coffee (as a supercritical solvent), polymer processing, chromatographic separations, biocatalysis, near infrared gas lasers, enhanced oil and gas recovery, construction materials such as cement and concrete, fumigants (for increasing shelf life and removing infestations), euthanasia for laboratory research animals, feedstocks for synthetic fuels and chemicals (such as urea and methanol, aspirin, polycarbonate, etc.), the list goes on and on. In its dry ice form, it also finds many applications as a solid refrigerant.

One of us must confess, as an active researcher working on CO2 chemistry and engineering solutions to climate change, as well as an invited editor for Advanced Science News who writes frequently about CO2 matters, it is rather a surprise—and quite an embarrassment—to discover that CO2 is a leading contender in the replacement of hydrofluorocarbons in next-generation refrigeration systems, even though it was one of the earliest known refrigerants.

I wonder how many others are in my shoes and find themselves in the same situation?

The first use of CO2 as a refrigerant can be traced to the mid-nineteenth century and was reinvented by Professor Gustav Lorentzen from the Norway Institute of Technology in the early 1900s. CO2, ammonia, and other first generation refrigerants were later displaced by chlorofluorocarbons (CFCs) after World War II.

The role of CFCs in the destruction of the stratospheric ozone ultraviolet protection layer led to their phase-out and replacement by perfluorocarbons (PFCs) and hydrofluorocarbons (HFCs) under the Montreal Protocol, which entered into force in 1989. These third generation refrigerants do not contribute to depletion of the ozone layer, but they are potent greenhouse gases with a global warming potential (GWP) between 1,000 and 4,000 for most of the gases.

The Kigali Amendment to the Montreal Protocol, which entered into force at the beginning of 2019, will phase-out PFCs and HFCs and replace them with fourth generation refrigerants, including ammonia, CO2, propane, and tetrafluoropropene (R 1234yf and 1234ze). These refrigerants do not deplete the ozone layer and their GWPs range from zero to six. The phase-out will occur mainly during the 2020s in developed countries and the 2030s in developing countries. It is estimated that the Kigali Amendment will reduce future warming by about 0.6oC.

Cooling systems and the refrigerants they use are designed for specific applications, so CO2 will be only one of several refrigerants adopted to replace PFCs and HFCs. Adoption of CO2 as a refrigerant is already growing, as is illustrated by its burgeoning use in ice- and snow-making machines for ice-skating rinks and indoor ski facilities, vending machines, hydrocarbon storage, cold-rooms, food production, industry, supermarkets and convenience stores, restaurants and hotels, hospitals, airports, rail stations, and even residential air conditioning. Some of these refrigeration systems are never shut down and have to maintain low temperatures throughout both operating and non-operating hours. 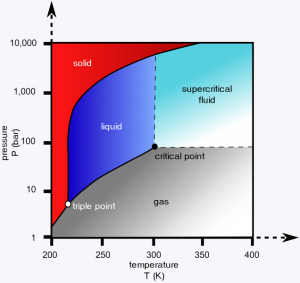 As a refrigerant with utility in many types of cooling systems, CO2 offers certain advantages over second and third generation refrigerants, including higher volumetric cooling capacity, lower operating temperatures, non-flammability, reduced operating costs, and lower global warming potential. But, CO2 refrigeration systems operate at higher pressures. The choice of operating regime for a CO2 system can be appreciated from the pressure-temperature (P, T) phase diagram shown in Figure 1, which depicts the gas/liquid/solid phase boundaries, “triple point” (where all three phases are in thermodynamic equilibrium), and the “critical point” (where the liquid and gas phases become indistinguishable). The “trans-critical” or “supercritical” fluid phase beyond the critical point is ideal for operating a CO2 refrigeration system.

It turns out that the higher pressure of a CO2-based cooling system, relative to one that is HFC-based, is associated with a higher compressor temperature. Though technologically more demanding and more costly, the higher operating pressure does, in fact, have certain advantages. In particular, a high fluid density throughout the cycle permits the miniaturization of cooling systems for use in mobile applications, such as in cars and trucks. In addition, a high outlet temperature of the compressor creates heat utilization opportunities, including applications in automobile windshield de-icing and integrated home cooling-heating systems. Windshield de-icing becomes more attractive for electric vehicles, where degraded battery performance at cold temperatures increases the importance of reducing auxiliary energy demands.

It’s interesting to note that the idea of using an automobile air conditioning system with CO2 as the refrigerant was proposed as early as 1989 by Professor Gustav Lorentzen. Nearly three decades later, and with vast research and development investments in these systems, Mercedes-Benz from the Daimler AG company in Germany is the first to market a vehicle with a CO2 air conditioning system that offers improvements in fuel economy, speed of cooling and defrosting effectiveness, and meets all pertinent automobile performance and safety standards. Notably, Volkswagen will follow the eco-friendly CO2 air conditioning pioneered by Mercedes-Benz.

One might ask, what about electric vehicles? Currently, there are about 40,000 fossil powered vehicles on the road with CO2 mobile air conditioning systems, which operate with mechanical compressors. This represents about 0.001% of the market. If this trend continues, it is anticipated that electric vehicles will require enhanced efficiency CO2 cooling and heating systems with electrical compressors in order to provide longer battery life and maximum driving range.

While the Kigali Amendment will significantly reduce the global warming impact of refrigerants, there is more to be done. Many of the fourth generation refrigerants, including CO2, are currently produced from fossil fuels using energy from fossil fuels. CO2 would be even more benign if it were recovered from the atmosphere or waste streams using renewable energy.

Full techno-economic and life-cycle analyses will have to be undertaken for CO2 and other Kigali Amendment refrigerants so that they can be compared side-by-side in terms of cost, equipment cost, operating cost, climate impact due to production and emissions, health and safety issues, other environmental impacts, etc. for different cooling and heating applications.

Regulations for handling second and third generation refrigerants help address the health and safety requirements of handling CO2, an odorless gas that is heavier than air and has a threshold limit value of 5,000 ppm for an 8 hour exposure (15,000 ppm for a 10 minute exposure) to prevent asphyxiation. At 30,000 ppm, one experiences breathing problems, headaches and dizziness; at 100,000 ppm, loss of consciousness and death; and at 300,000 ppm, a very rapid death. This is an urgent and critical reminder to all those working with CO2 in closed spaces, where CO2 detectors are mandatory.

How ironic that after more than 50 years of contributing to depletion of the ozone layer and climate change, we are reverting to the original refrigerants!

In addition, isn’t it also ironic that CO2, blamed as the main culprit driving global warming, is improving its reputation as an environmentally friendly refrigerant?

All the more reason to start thinking about this “cool” idea sooner than later.

A New Method to Chemically Recycle Polyurethane Waste
"Untapping" tap water consumption in Europe
A Bioplastic Made From Fish Waste
Could restoring peatlands be key to saving the planet?