Fuel adulteration: Rubber swelling as a new method of detection

Relating the swelling of styrene-butadiene rubber to the concentration of toluene in gasoline represents a new method to detect fuel adulteration. 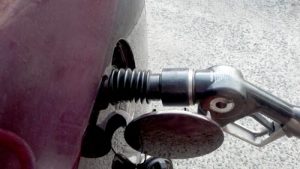 Gasoline is generally a mixture of petroleum hydrocarbons between four and twelve carbons. However, organic solvents are sometimes added to reduce the price at the gas station. Since adulterated fuel can cause engine problems and increase the emission of pollutant gases, low-cost methods of estimating the adulteration have been on the rise.

“The aim [of this study] is to establish a new method to detect fuel adulterations using polymers as sensors due to different chemical affinities of polymer to solvents expressed by the degree of swelling,” explains Takeshita. When a crosslinked polymer is placed in a solvent, the solvent molecules penetrate into the network and the polymer swells. The degree of swelling is affected by the solvent characteristics such as molecular weight, polarity, and molar volume.

The mass and volume swelling measurements were taken after immersion in the test liquid. The researchers found that all tested mixtures resulted in some swelling of the SBR, but the intensity of the swelling was directly correlated with the quantity of organic solvent, specifically toluene, in the mixture.

“The analysis of variance for the mass swelling verified that it is possible to find good mathematical equations to describe the relation between rubber swelling and solvent composition,” concludes Takeshita. “This finding opens a new line of research with many potential practical and experimental applications.”

Microrobots against harmful polymers in water bodies
Sponging up oil droplets from Arctic wastewater
Solar kerosene: One giant leap for humankind
High performance supercaps made from cotton waste and seawater