Consumption of both fruit and vegetables shows a higher 15-year overall survival probability in prostate cancer patients than those with lower intakes. 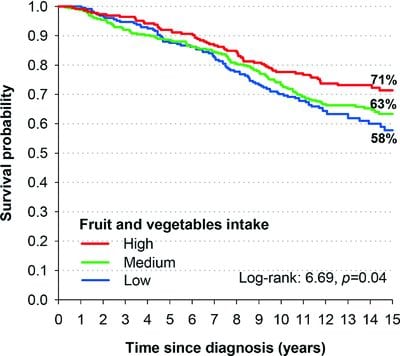 In high-income countries, prostate cancer (PCa) is the most frequent male cancer. Although the fraction of the latent, early stage PCa – which generally has favorable prognosis – is increasing, this cancer still represents one of the top three causes of cancer death among men. Despite the great number of investigations on the association between dietary habits and PCa risk, evidence on the effects of diet on PCa prognosis is still scanty and controversial.

In work aimed at clarifying the situation, Jerry Polesel and colleagues from the CRO National Cancer Institute, Aviano, Udine University, and the Venetian Cancer Registry in Padua, Italy evaluated the long-term effects of fruit and vegetables consumption on survival after PCa. They looked at a retrospective cohort study which included 777 men with PCa diagnosed between 1995 and 2002 in north-eastern Italy and followed-up to 2013. A validated food-frequency questionnaire assessed the usual diet in the two years before PCa diagnosis, including detailed fruit and vegetables consumption.

They found that PCa patients with an above average consumption of both fruit and vegetables showed a higher 15-year overall survival probability than those with lower intakes (71% vs 58%, see the graph above), probably due to the epigenetic effect of some nutrients.

Further details are to be found in the journal Molecular Nutrition and Food Research.

The power within our gut
Cowpea virus can keep metastatic lung cancers at bay
Is "synonymous recoding" the future of vaccine development?
A single drug therapy to fight resistant cancers