From the Wiley archives: Preparing for emergencies

With the current COVID-19 pandemic ongoing, we were curious how Wiley journals were publishing the latest research 100 years ago, when another, and worse, pandemic ravaged the world. 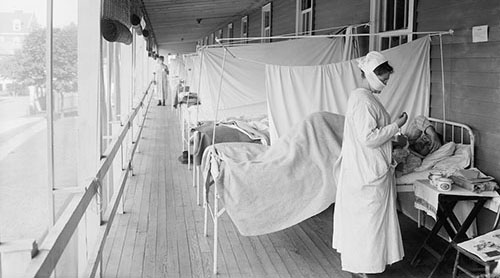 A century ago, the world was shaken by the worst pandemic in human history. It is estimated that the flu pandemic of 1918 to 1920, commonly referred to as the “Spanish flu” (despite not originating in Spain) claimed more lives than the entire four years of the First World War that had already traumatized so many people by the time the pandemic spread.

The current COVID-19 pandemic is not on the scale of the flu pandemic over 100 years ago, but lessons from that period can still be learned today as countries the world over try and “flatten the curve” and prepare for unprecedented lock downs.

Advanced Science News has been digging through the archives of the Wiley Online Library to see how the scientific and medical community were dealing with the 1918 flu pandemic then, and how things compare to now.

In early 1920, an article titled “Preparing for Emergencies” was published in the Medical Journal of Australia, in which reports of the influenza that devastated the country and others a year previously was making a come-back, and how to combat the threat again were discussed.

Some recommendations on how to avoid the worst of a pandemic are surprising by modern standards, and especially by current events. The closures of schools was not deemed necessary, since the authors believed children were better off in a classroom where they can be supervised than outside; “There is far more intimate contact between children playing in the gutter than in the school room.”

Churches and theaters were advised to merely remove every other seat and every other row of seats so as it spread people apart, to curtail community transmission.

Vaccinations were deemed useless based on fruitless efforts during the previous waves of the pandemic. But this was due to the fact that no one knew at the time that the flu was caused by the influenza virus, and not Haemophilus influenzae, which contemporary doctors were using in their “vaccines” against this strain of flu. In fact, it wasn’t until 1933 that scientists discovered this bacteria, commonly found as a secondary infection in pneumonic influenza patients, was not the primary cause of the flu.

And finally, the authors appear resigned to the fact the pandemic cannot be stopped once it takes hold, and so people should carry on as normal: “Only good can follow the endeavours to allay public fear and to reassure the people that they are safer if they continue to follow their ordinary vocations than if they seek to provide protection by endeavouring to run away.”

However, some advice and discussion brought forward is not dissimilar to what we’re being told now to fight COVID-19. The efficacy of face masks for the public at large is questioned, and the prompt isolation of suspected patients is stressed as key in mitigating community transmission.

The chances of COVID-19 being anywhere close to comparable to the 1918 flu pandemic are thankfully remote, but we can nevertheless learn lessons from the past, and with over a century of hindsight and experience, we’re lucky that we largely have. We know that when a vaccination for COVID-19 is developed, this will be a huge help in either ending the pandemic, or preventing a future one from breaking out. We also know that closing public spaces where large numbers of people congregate — whether they be school children or church-goers — has a huge effect on slowing down community transmission.

On a final note, we know of one simple piece of advice that is notable by its absence in the 1920 paper — washing hands with soap and water can save lives.

The text below is this article in full, as it was published 100 years ago this month.

There are indications that a fresh outbreak of influenza will occur in Australia within a short space of time. In other parts of the world this uncanny disease has reappeared, either in a mild form or, if the reports available can be accepted, in a virulent form. The infection may be imported, or it may awaken from its dormant condition and again spread in the several States. It is impossible to prophesy whether the storm will break or whether the clouds will disperse unbroken. It is equally impossible to anticipate the form or degree of severity the disease will take should the expected occur. The omens should be heeded and preparations should be made to meet what fate has in store for Australia. In the States the authorities are already busy, endeavouring to make arrangements with the members of the medical profession to carry out the work of attending to those who may fall ill. What can be done to mitigate the evil? The experience of last year is still fresh in the memory of the medical profession and it would be well to use that experience in the best interests of the community. A year ago there was something approaching a panic and the measures adopted were largely of the nature of panic measures, At all costs the public should be reassured by plain statements concerning the disease. Confidence can only be attained if the medical profession admits frankly and without reserve the extent of its ignorance of the causation of influenza and the limitations of its powers to gain a mastery over the disease.

In our issue last week we published an important and highly instructive discussion on the pathology of influenza. Dr. S. W. Patterson, the Director of the Walter and Eliza Hall Institute of Research in Pathology and Medicine, is apparently inclined to favour the view that influenza is caused by a filter-passing organism, although many authorities are not prepared to accept the scant evidence offered by Nicolle and Lebailly, by Gibson, Bowman and Connor and by Bradford, Bashford and Wilson. In the absence of definite proof, we should confess complete ignorance as to the primary cause of this affection. Dr. Patterson’s remarkable curve of the frequency with which the bacillus of Pfeiffer [Editor’s note: This is now known as Haemophilus influenzae] was recovered from the lungs and bronchi of patients suffering from influenza in France, is strongly suggestive of a very close association between the unknown virus and this organism. He and many others have demonstrated that pneumococci are also common secondary invaders. It has further been shown that Types III. and IV. are usually found. There appears to be a consensus of opinion concerning the importance of these observations in their bearing on the treatment of the pulmonary complications of influenza. Inoculation with vaccines containing influenza bacilli [H. influenzae. Ed.], pneumococci and other associated organisms was tried in many countries by many competent observers and it would be hazardous to say whether the verdict is in favour or against a prophylactic value. In these circumstances, if the health authorities include vaccine in their programme, they should not endeavour to compel anyone to submit to this procedure, nor should they mislead the public by definite statements that these vaccines exercise a power of prevention. In the next place, the authorities are unlikely to repeat the mistake of requiring persons wishing to travel by train to use an inhalation chamber. It has been shown that exposure to an atmosphere of steam and sprayed solution of zinc sulphate is not quite harmless. In view of the curve of the epidemic in New South Wales and Victoria a year ago, it appears that the expedient of masking is without any value. It had the effect of creating discomfort to those who were compelled to wear them, unless, indeed, the wearers applied tho gauze in such a manner that it did not become saturated with moisture within ten or twenty minutes, It is to be hoped that none of the health authorities will institute compulsion in this connexion [sic], either in public conveyances or in public halls and rooms. From a common sense point of view, it is improbable that masking could have any beneficial effect in preventing the spread of infection.

The question of the closure of places of entertainment, of churches and of schools is much more difficult to answer. In the course of a dangerous epidemic, especially when the infection is by droplets of infected saliva or mucus, as is usually held to be the case in influenza, the risk of infection is undoubtedly enhanced when persons crowd together in a confined space. Victor Vaughan has shown quite clearly that the incidence of pneumonia among the troops in the American camps was reduced to a very great extent by the avoidance of close formation during drill and of crowding in the rooms where the men slept. As far as schools are concerned, it should be easy to prevent any undue crowding. The children are usually well situated at school as far as hygienic environment is concerned. The teachers can exert a helpful supervision, particularly if daily medical inspection by a medical practitioner can be arranged. There is far more intimate contact between children playing in the gutter than in the school room. For this reason it appears to us that the schools could be kept open with advantage, at all events while the teaching staff is not reduced as a result of the disease. Churches, theatres and picture palaces can be rendered relatively safe if those attending are kept farther apart than usual. The removal of alternate seats and of alternate rows of should suffice to diminish the risk of a spread of infection, provided that persons obviously ill are excluded from attending. We cannot conceive any means of removing the grave risk inherent in the moving and surging crowd viewing a race meeting, a cricket match or a boxing competition.

The best prospects of stemming the spread of infection would appear to be in the immediate isolation of all persons showing the signs of an impending attack. Isolation should not be delayed until the diagnosis is firmly established. It should be applied on reasonable suspicion of infection. No great harm is done if some people are subjected to rigid control for a day or two without real need. The more promptly and the more universally the isolation of patients in the early stages is carried out, the less will be the amount of infection uncontrolled. In the last place, the general resistance of infection of the community as a whole is greatly lowered by fright, panic and constant reminders of the existing dangers. Only good can follow the endeavours to allay public fear and to reassure the people that they are safer if they continue to follow their ordinary vocations than if they seek to provide protection by endeavouring to run away.

In our opinion, there is little that can be done to prevent the spread of infection, once it gains a firm hold on a community. Organized assistance for the prompt isolation and treatment of the sufferers represents the best form of preparation to meet the foe we are awaiting.