Prizewinners are selected based on the degree to which they achieve impact, innovation, long-term vision, and leadership in renewable energy and sustainability. 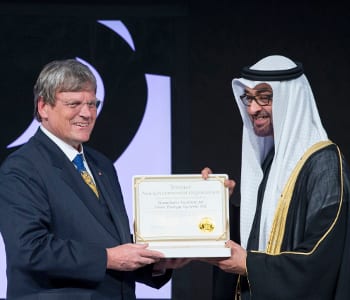 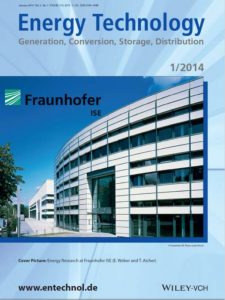 The “Energiewende” in Germany has become an international model for transitioning to renewable sources of energy in recent years, but the Fraunhofer Institute for Solar Energy Systems was working hard on this challenge long before it was fashionable. As the Europe’s largest solar energy research institute, researchers at the institute have been developing methods for harnessing solar energy for more than 30 years.

In recognition of these efforts, the Fraunhofer ISE was awarded the Zayed Future Energy Prize 2014, on January 20, in Abu Dhabi. The prize is endowed with $1.5 million, and prizewinners are selected on the basis of the degree to which they achieve impact, innovation, long-term vision, and leadership in renewable energy and sustainability. A number of examples of the institute’s recent work can be found in a special issue of Energy Technology highlighting the work of Fraunhofer ISE, published this month.

Each year the Emirate awards the Zayed Future Energy Prize in memory of Sheikh Zayed bin Sultan Al Nahyan, who championed environmental stewardship as the first president of the United Arab Emirates and Emir of Abu Dhabi.

Prof. Eicke R. Weber, director of Fraunhofer ISE, said, “We are absolutely delighted that the Zayed Future Energy Prize committee has decided to honor Fraunhofer ISE’s more than 30 years of work on sustainable energy supply in this way. This generous prize will enable us to offer our re- search in support of countries that haven’t yet set out to develop a new energy economy. For one thing, we will be able to further refine the energy system analyses and energy supply models that we have developed in-house. These make it possible to achieve a seamless and cost-effective transition to a sustainable supply of energy in other regions, too, and also lay the foundations for technological collaboration.”