Layer-by-layer assembly (or LbL assembly for short) is a promising candidate for scaling up the production of thin films to meet industry needs. 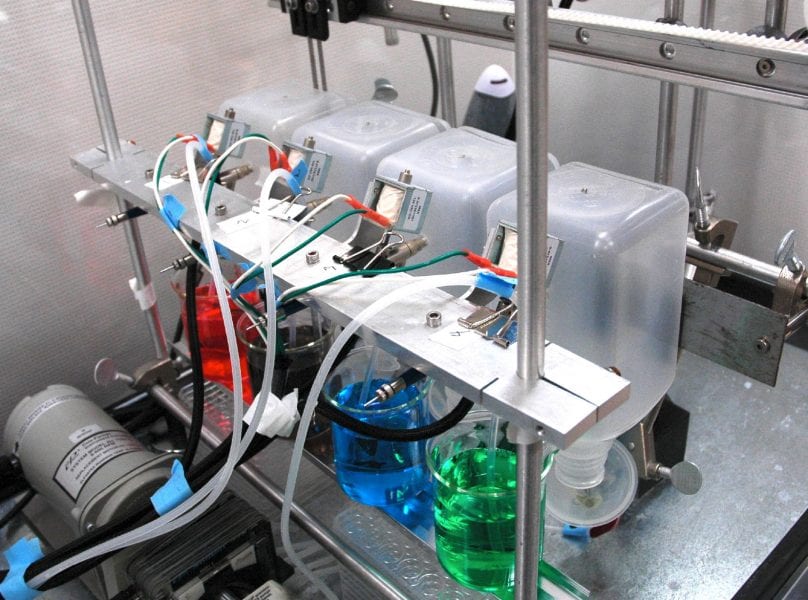 Layer-by-layer assembly (or LbL assembly for short) is a promising candidate for scaling up the production of thin films to meet industry needs. The assembly process has many positive qualities: it is simple, performed at room temperature, uses aqueous solutions and can be automated.

In the most basic LbL assembly method, a substrate is immersed in solution and slowly drawn up. The material in the solution attaches to the substrate to form a thin film. Additional layers with complimentary intermolecular interactions are formed by alternating the dipping pattern. However, LbL assembly using the dipping method can be quite slow, taking several hours to multiple weeks to form the final product.

An alternative to dipping is spray LbL assembly, where the substrate is simply sprayed with the film material using an airbrush nozzle. Layers are formed in seconds, considerably speeding the process. The downside to spray LbL is that a large amount of material is lost during spraying. In a new report in the Journal of Applied Polymer Science researchers from MIT, led by Paula Hammond, have developed a method to collect and recycle the excess spray by using containment chambers. 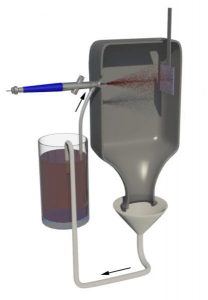 In the new recyclable spray LbL assembly method, each layer is applied in an individual containment chamber. The solution is sprayed onto the substrate to form the film. The excess spray is transferred from the chamber back into the solution reservoir using a peristaltic pump. The substrate is then washed with water to remove non-adhered material and moved along a motorized track to the next chamber, where the process happens over again with a new material. Each layer is formed after only 3 seconds of spraying and 5 seconds of washing.

To show the viability of their method, the researchers fabricated a four-layer film of a degradable poly(β-amino ester), heparin, lysozyme, followed by heparin again. The films were models for biomedical applications, with lysozyme acting as a model protein. The researchers tracked the lysozyme content of the films to determine the applicability of their system as drug delivery vehicles. 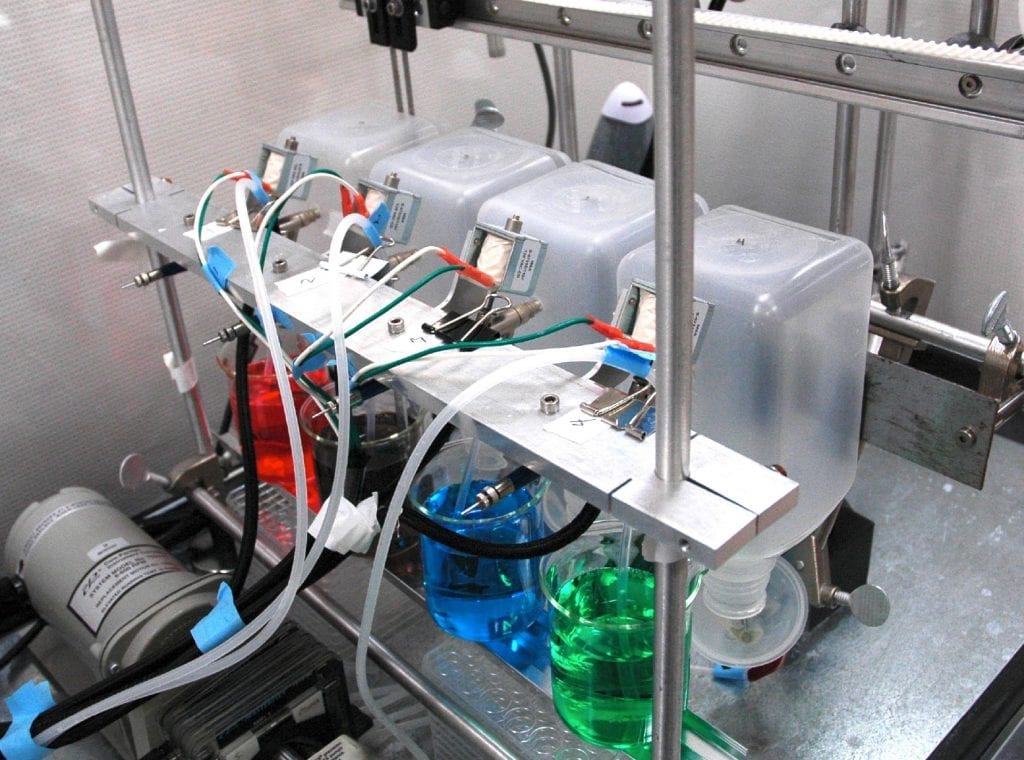 Photograph of the set-up for fabricating the four-layer films.

After 20 sequences, the concentration of the lysozyme solution in the reservoir became diluted, with nearly 25% of the excess spray material ending up in the wash solution. The dilute solutions led to thinner layers as more sequences were built up. Even with dilute solutions, however, films comprised of 80 sequences contained nearly as much lysozyme as similar-sized films fabricated using the conventional spray LbL technique.

To reduce material loss, the researchers optimized the timing of the spray and wash steps. By shortening the spray duration to 0.2 seconds and allowing the film to rest for 5 seconds before washing, only 11% of the excess spray material was lost to the wash solution. As a consequence of the shorter spray duration, less lysozyme was incorporated into the film. The researchers estimated that roughly a monolayer of lysosome was deposited each sequence. As a result, the films produced by the optimized recycled spray LbL method were considerably smoother.

The recyclable spray LbL assembly method has the potential to expand fabrication of thin films to include more expensive molecules, opening up applications for drug delivery vehicles. The reduced material use and shortened timespans will also aid in scaling up the process to sizes required for industrial production.

Nature can adjust to a new climate, though perhaps not fast enough
A sprayable chemical sensor for better environmental monitoring
Tackling the cooling challenge with a chiller efficiency policy in India
How a Rhode Island-sized crack appeared in the thickest Arctic ice