Fight or die? How prokaryotes deal with infections

In their review in BioEssays, Eugene Koonin and Feng Zhang discuss the different outcomes when prokaryotes are infected by a virus. 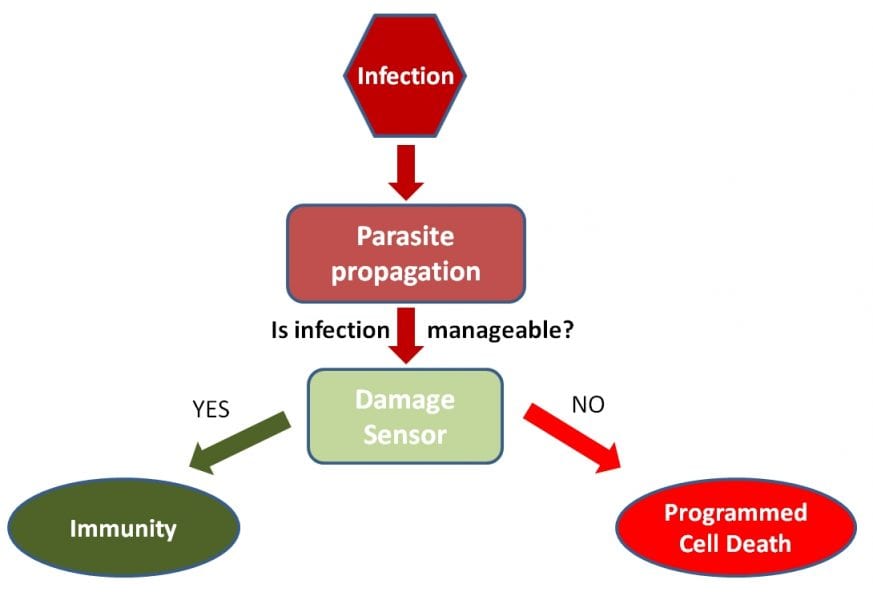 If a multi-cellular organism is faced with an infection or a parasite the immune system usually kicks in to fight the ‘intruder’. But how do bacteria deal with pathogen infection? The discovery of CRISPR-Cas systems conferring adaptive immunity in bacteria and archaea has shed some light on this question. In this system, short virus sequences are integrated into the CRISPR locus of the cell. This allows the bacterium/archaeon to ‘remember’, recognize and clear infections.

However, what happens if these immunity (and resistance) mechanisms fail? As Koonin and Zhang point out, in these cases the cell still has the possibility to commit altruistic suicide (or to enter a state of dormancy). By undergoing programmed cell death (PCD), the cell prevents the pathogen from reproducing, and – in this way – other cells are protected from infection. Interestingly, PCD modules typically colocalize with immunity genes.  Furthermore, these two types of defense system – immunity and PCD – also have some proteins in common suggesting that they are functionally coupled. 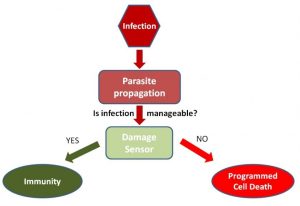 A recently discovered new Class 2 CRISPR-Cas system provides a good example for the dual immunity-suicide function. Cas13a (also termed C2c2) is a type VI CRISPR effector with two HEPN domains that are predicted to possess RNase activity. As expected, Cas13a provides efficient protection against the RNA bacteriophage MS2. In addition, it is also able to non-specifically cleave other available ssRNA targets. The authors hypothesize that this non-specific cleavage might serve as a defense mechanism against DNA phages whereby recognition of a virus transcript turns Cas13a into a promiscuous RNase leading to PCD (or dormancy).

In their review, the authors also propose that dedicated sensors determine the amount of damage inflicted by the pathogen allowing the cell to make this decision between immune and suicide mechanisms. Signals that might be sensed include double strand breaks in the DNA (a sign of genotoxic stress) as well as the concentration of dTTP (this accumulates during phage infection).

Crawling out of the shadows: Arthropods as vertebrate predators
Understanding language evolution: Beyond Pan-centrism
A Tail of Two Pathways: Regulation of mRNA 3’ Ends During Cellular Stress
Understanding human aging with the help of a worm